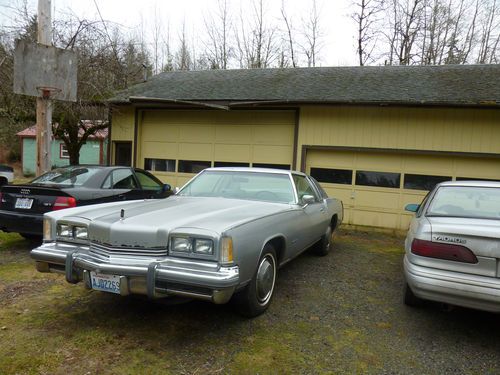 Condition: Used: A vehicle is considered used if it has been registered and issued a title. Used vehicles have had at least one previous owner. The condition of the exterior, interior and engine can vary depending on the vehicle's history. See the seller's listing for full details and description of any imperfections. ...
This car had only one owner, it was sitting in a storage facility for a couple of years and was barely driven. I saw that this car was a steal so I purchased it, I had plans to restore it completely But I don't have the time for that anymore. When I bought it the battery just needed a charge and it started right up and has always started right up since, I only drove it about 10 miles to my place (drove like a dream), transferred the title with new tabs (good till 2014) and new plates as well. The cars interior is an amazing white leather (which was a premium for this year) And it's in near perfect condition. Looking under the dash there doesn't appear to be any tampering of any kind, all of the electrical is still in great condition. Dash is in great condition as well, power windows, locks and power seats, could use a new set of wiper blades. Virtually no dents on the exterior, I believe it could use a slight paint job (I recommend a Rust-oleum "do it yourself for $50" paint job, to me that's the best paint to use on a vehicle especially an old one). Behind the tail lights there seems to be a space where this cheap plastic covering used to be, which explains why it isn't there anymore. My plan was to replace it with something that would last longer than plastic But if you would wish to keep it original it seems like this part is standard on most Olds and looks like if you found the pieces they may just slide right on. This cars value increases about every 3 months so It will be worth much more in the future if kept maintained. I still believe this vehicle is a great steal, I myself wish I could keep her.
If you have any questions please don't hesitate to ask and I'll do my best to respond quickly.