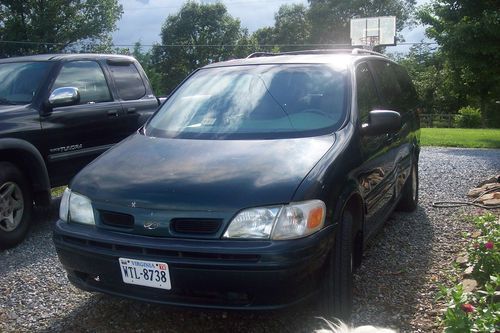 Condition: UsedA vehicle is considered used if it has been registered and issued a title. Used vehicles have had at least one previous owner. The condition of the exterior, interior and engine can vary depending on the vehicle's history. See the seller's listing for full details and description of any imperfections.Seller Notes:"This van has a good motor and transmission. The A/C does NOT work. This van has some kind of electrical problem sometimes it runs perfect (like every time I take it to my mechanic to get it fixed he'll drive it for a week and it's fine) other times it will start to kick and stall (like when my wife wants to drive it). I put a new computer in and it may be the security system causing it to act funny. I followed the instructions to program the key and that fixed the stalling originally but it's back now. It has a brand new windshield. The wipers need to be adjusted and programed. There is a dent in the driver side passenger door and back. I started a second job and don't have time to mess with it anymore. Unless you can fix it consider it for parts."

This has been our family van but kids are grown and driving themselves.  This is the Premium addition so it has all the options including LCD Screen that will play with a dvd player (I took out the dvd player that was in it and use it for the kids in the basement.)  Tires are in good shape.  Auto door lock works only with the key and when you put it in drive or turn it off.