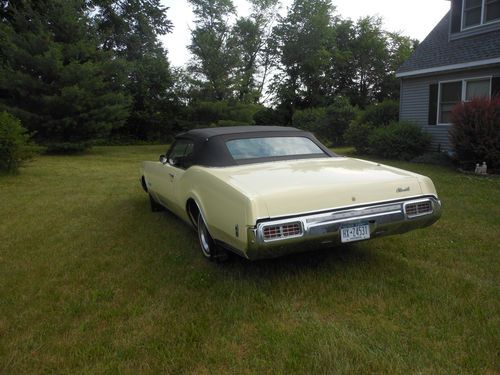 Condition: UsedA vehicle is considered used if it has been registered and issued a title. Used vehicles have had at least one previous owner. The condition of the exterior, interior and engine can vary depending on the vehicle's history. See the seller's listing for full details and description of any imperfections.Seller Notes:"This heated garage kept beauty is in excellent shape.It has some minor faults that aren't noticeable unless you look for them. The mirrors are temporary replacements but I do have the original reproductions that go with the car. The tires are like new and as far as I know it's needs nothing else. Passed NYS inspection in April. This is a beautiful car and I get complements every where I go."

This is a very rare classic beauty. The Delmont was only built in 1967 and 1968 with each having different body style features. The Delmont started the sweeping GM Coke Bottle design and the 1968 model also started the classic split grille for Oldsmobile. When you ordered a convertible it came with extra chrome trim and the option for the larger 455 engine.There were only 2812 Delmont's built with only about 200 on the road today. I don't know how many are Convertables but I can safely say that you never saw one at a car show. Not only is this car in it's present gorgeous condition but it drives even better. This car runs SPECTACULAR and with it's 455 cid Rocket V8 engine it has enough power to "SMOKE" the tires at will. The automatic transmission shifts smooth and with it's long sweeping lines cuts through the wind effortlessly as you cruise down the highway with the top down and the wind blowing in your face. The clock has stopped but everything else works great on this Olds and will provide it's new owner with many years of hassle free and fun driving. This car is ready to go at first asking and priced well below NADA pricing.