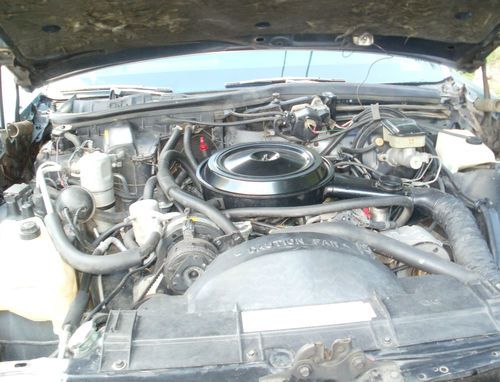 ANTIQUE 1985 OLDSMOBILE DELTA 88 ROYALE SEDAN, 4 DOOR WITH VINYL TOP. 96,320 ACTUAL MILES. HAS BEEN GARAGED KEPT, 2ND OWNER NEVER DRIVEN IN THE SNOW,NEVER SMOKED IN VERY CLEAN IMMACULATE CONDITION. HAS VELOUR SEATS NO RIPS, TEARS, STAINS ANYWHERE, THE HEADLINER IS SWAGGING A LITTLE BIT BUT IS STILL INTACT.ALL GLASS AND MIRRORS ARE PERFECT NOT BROKEN, ALL LIGHTS WORK NONE BROKEN. I HAVE INCLUDED A PHOTO OF THE ORIGINAL STICKER PRICE SHEET THAT WAS ON THE WINDOW WHEN NEW.STILL HAS OWNERS MANUAL IN PLASTIC BAG. THE CAR HAS AS YOU CAN SEE IN THE PICTURES THE LITTLE STRIP OF TRIM AT THE BASE OF THE VINYL TOP IS CRACKED AND ONE PIECE OF PLASTIC AT THE BACK BUMPER PASSENGERS SIDE IS BROKEN AND HEADLINER IS SWAGGING OTHER THAN THAT IT IS IN PERFECT COND. NO RUST, DENTS OR SCRATCHES ANYWHERE.RADIO AND CASSETTE PLAYER WORKS GOOD. STILL HAS ORIGINAL SPARE TIRE AND JACK WITH IT CARPET IN TRUNK IS ORIGINAL NO STAINS OR LEAKS. EVERYTHING IS STILL BOLTED UP IN ORIGINAL COND.IF YOU HAVE ANY QUESTIONS ABOUT THIS VEHICLE FEEL FREE TO MESSAGE ME,UNDER THE HOOD IS CLEAN NO OIL OR WATER LEAKS. 17 MILES PER GALLON IN CITY, AND 24 ON THE HIGHWAY. THIS IS OFF THE ORIGINAL STICKER. HAS BEEN SERVICED REGULARLY. MUST RECEIVE 500.00 WITHIN 48 HOURS OF AUCTIONS END AND REST DUE AT PICK-UP. CAR COMES WITH NO WARRANTY,BUYING AS IS THAT IS WHY I'M DESCRIBING IT SO PRECISELY WITH LOTS OF PICTURES.....GOOD LUCK AND HAPPY BIDDING..