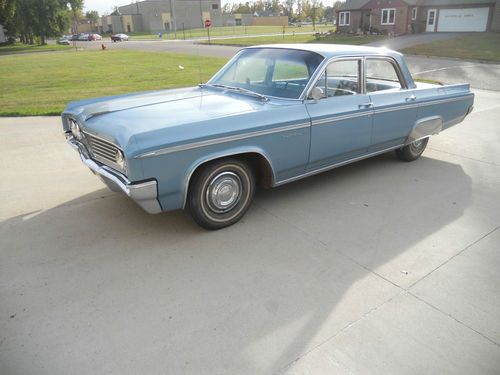 1963 Olds Super 88 4dr has only 37,850 original miles, 394ci High Compression Engine No Leaks. Paint Code FF Blue BRuns like new car, quiet. Interior is immaculate beautiful  no tears no rips  no stains it is Perfect as you can see. Original Factory floor mats. Front seat belts only. Radio, Heater all lights work..Trunk has all original paneling n carpet spare tire jack, Glass Clear no scratches no pits windows all role up and down perfect, Body is SOLID  has dent on passenger side fender n dent passenger lower quarter minor. Paint Shiney, Doors all open and shut real easy. Stainless wheel skirts. Bumpers have little rust were bolted . This car drives like a dream Drive it home..Drive it any where.....Real Beautiful car make me offer car listed localy for sale also... e-mail me check out my other auctions....