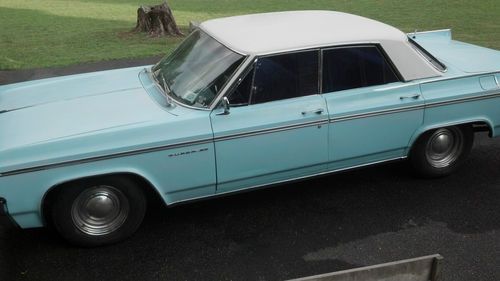 Up for sale is my 1963 Oldsmobile Holiday Super 88. I have had this car for awhile now. All gauges, lights, wipers, original AM radio and separate cassette deck, etc. are in working condition. It last passed New York State inspection in April 2011. During the fall of that year, I noticed it was smelling of gas. The repair shop said it was either the fuel pump (although there were no leaks of gas) or the carb needed to be rebuilt or replaced. He also said there were drips of oil coming from the oil pan (mostly likely just the seal). I was parking it anyway for the winter but have not touched it since I pushed it out of the garage last week. I took it off the road in April 2012 when the inspection ran out. It could also use a new battery. Up to that point it was a great cruising car (especially when all the windows are down and there is no break inbetween). The original tissue box has a Kenwood cassette player installed in it (see picture). 67,368 original miles. Car is a looker. Although it does have imperfections when up close.

Please ask any questions and I will answer as best I can.

Car is for sale locally.

No liability auction, as is where sale.

Car will need to be towed. I am located about 20 miles south of Albany, NY and less than 2 hours north of NYC.