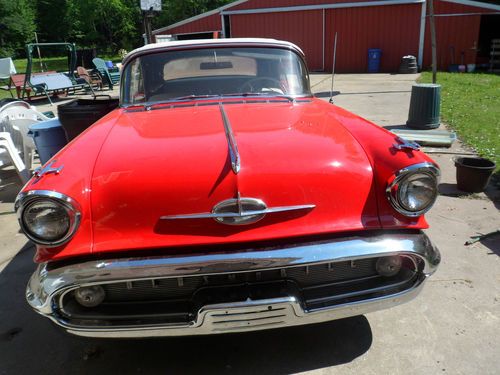 1957 OLDS 88 CONVERTIBLE, POWER STEERING, AUTOMATIC, ORIGINAL ROCKET 88 ENGINE, FLOORPANS PROFESSIONALLY REPLACED, NEW CARPETS GO WITH IT, THEY WERE FACTORY CUT TO FIT, HAS 2 HUBCAPS, TRUNK HAS NEVER BEEN RUSTED OUT, ORIGINAL RADIO, WORKING POWER TOP, VERY GOOD TIRES, RUNS AND RIVES VERY WELL. BEING SOLD AS-IS. IF YOU'D LIKE TO VIEW IT BEFORE BIDDING OR HAVE ANY QUESTIONS, PLEASE CALL DICK AT 419-376-3862. I LIST FOR MY DAD AND HE DOESN'T DO WELL WITH EMAIL SO PLEASE CALL. THANKS FOR LOOKING AND HAPPY BIDDING!!!