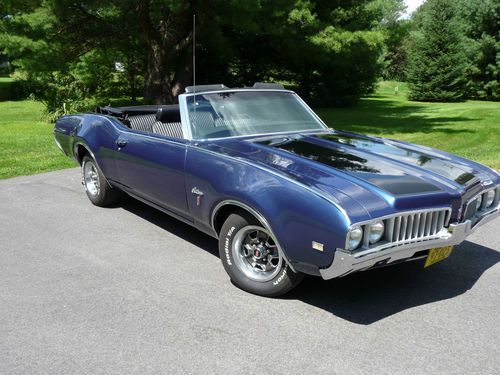 Condition: UsedA vehicle is considered used if it has been registered and issued a title. Used vehicles have had at least one previous owner. The condition of the exterior, interior and engine can vary depending on the vehicle's history. See the seller's listing for full details and description of any imperfections.Seller Notes:"Complete body on restoration."

Up for auction is my 1969 Oldsmobile Cutlass 'S' Convertible.  This is an unmolested, original Cutlass S,   Not a 442 'tribute',  'recreation',  or 'clone'.       I bought this car from a good friend in July, 2009.  He bought it in West Palm Beach, FL in 1971 and put the car in storage in 1996.  After several inquiries,  he agreed to sell it to me in 2009 and since has undergone a full restoration.   Oldsmobile restoration is costly.   I have spared no expense in the process.    I don't expect to recover my full expenses.  I did it for my own enjoyment and want to sell this car for a fair price.  This car is a pleasure to drive, no issues,  and is a head turner.  My reserve price is set much lower than my investment.

Body:  Body and paint are exceptional.  The frame is solid.  Floorpans are solid and passenger footwells have been reinforced with fiberglass. The body has been undercoated.
Original sheet metal with a new quarter panel on LR.  All work done by a custom body shop.   Paint is Trophy Blue with high gloss clear coat.  Panels are laser straight and gaps are normal.    Rechromed OEM front bumper,  new windshield,  all new emblems,  new outside mirror,  new sealed beams.