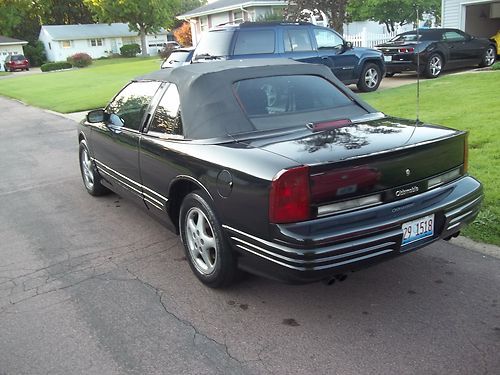 1994 Olds Cutlass Supreme Convertible. Automatic w/ 3.4 V6. 145,000 miles. Runs and drives great. Would make a good daily driver or an excellent car to restore. These convertibles are getting hard to find for a cheap price.Here are the specifics:

1.Exterior:
Paint is still pretty shiny and in good shape. Normal dings and scratches for a car this old. No rust. Issues are: Needs tires, front two are bald back are almost there. Drivers outside door handle is inoperable. Common for this style of handle. I have a brand new one i bought that you can have. Needs pass. side sidemarker light. Real cheap on ebay. Pass. side molding has a piece missing where the fender meets the door so when you open the door it slightly hits the fender(see pic).
2. Interior:
Leather interior is in fairly good condition. Drivers seat is a little more worn then others. The leather on the middle console lid is cracking, another common thing with these cars. Inside door panels are a little loose. Driver side window motor is bad. Part is inexpensive on ebay.Has an older style Pioneer CD player. Speakers are still the factory ones. Convertible top is in good condition but the top motor is weak. It still goes up and down but you have to manually help it.
3. Mechanical:
Runs and drives great. Motor is real strong and transmission shifts as it should. Recent battery and alternator replacement. No exhaust leaks. No fluid leaks. Brakes stop as they should. Only thing i can think of mechanically wrong with it is the AC blows warm.
Sorry about the detailed description but i wanted to make sure you know everything i know about this car even if it is minor. Selling with no reserve so you will get a great deal. Thanks for looking.