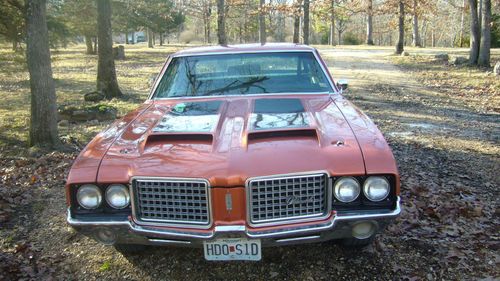 1972 Cutlass Supreme, has a rebuilt 455 Oldsmobile Rocket not stock been modified with a Torqer 2 intake, headers and few other upgrades, you rev it and whole care will rock back and forth with the torque of the 455, with a rebuilt 350 turbo Transmission with shift kit, 442 hood, Hurst shifter, low geared rear end, would need to be changed if want as a gas efficient daily driver, interior has been redone, new covers on original seats so looks like it did in 1972, new carpet and headliner, new door panels, new dash top,almost all the interior is new, only thing I did not change was original steering wheel. Has 50's in the back and 60's on the front as tire set, tires in very good condition. Power steering, power brakes, still all drum brakes original. Car is in good condition as it was  restored less then 2 years ago, I have used it as a daily driver for a short time, but used primarily just to show off in. I have owned the car for 4 years. Car is currently licensed. Has no AC though. Has new weather stripping , new window felt, new seat backs with new chrome,new headrests just not on the seats at the moment Frame and body are solid. Car is a head turner going down the road. Could easily be changed to a 442 clone, just add the emblems, will also add in a gallon of the same color paint that I have. Hate to sell the car, but have another project and wife says can not have 2 old cars. New bumpers, new shocks, air shocks in the back Goes down the road straight.This not a Bondo Queen.  Will consider all reasonable offers. I have the right to end auction early because it is listed locally. Any questions feel free to ask, will answer best I can.

Serious bidders only please.
Buyer is responsible for shipping or picking up the car.