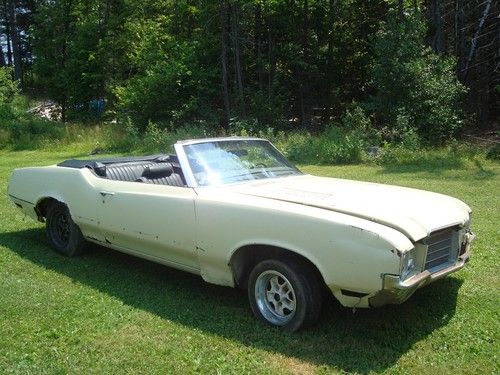 72  Cutlass convertible, 350 rocket , th350 trans. this is a project car, last inspected in 1984. runs good and will yard drive, has no exhaust or brakes, parking brake only. Frame and floor pans are good, trunk needs a floor, needs quarters and lower front fenders. Interior is in very good original condition needs only a carpet. power top works good, fabric is bad. overall an easy numbers matching car. thanks for looking

There is no title for this vehicle, Maine does not title vehicles this old, will be sold with a bill of sale only. Car has been stored inside, I do not know if mileage is correct, thanks