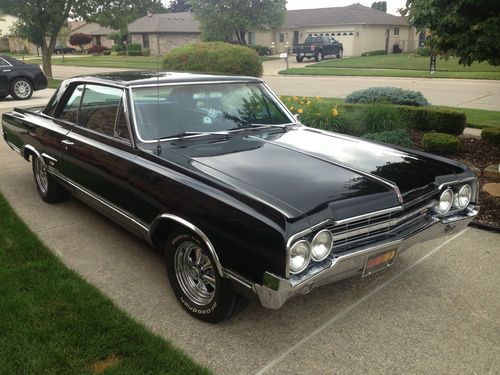 1965 Oldsmobile 442.  This is a real all original 442 with one repaint.   Original 400 engine with the jetaway transmission and runs strong.  This 442 has all of the original parts except for the t handle shifter and a replaced alternator.  Power steering. The half moon hubcaps come with the car, though are not pictured.  The tach works.  The chrome is in decent shape and can be polished and have very few dings on the rear windshield reveal moulding.  The pot metal on the side is in excellent shape though not perfect.  Would look really nice as is on a repainted car.  The rear panel plate could be stripped and refinished, but is a little rough.  A second plate is included.  An uncracked dashpad also is included in the sale Modern radio is hidden n the glove box.  Bumpers are in decent shape but could be rechromed if the car is restored.  The interior is in nice shape.  The flaw on the driver side seat is shown.  The frame is rock solid with no rust.  The trunk pan needs to be replaced.  The rust spots on the body are shown in the pics.  This is a great car to drive, and also also great car to drive while restoring it.  Engine block number 289298B.  The car is located in Clinton Township Michigan if you're interested in inspecting it before bidding.