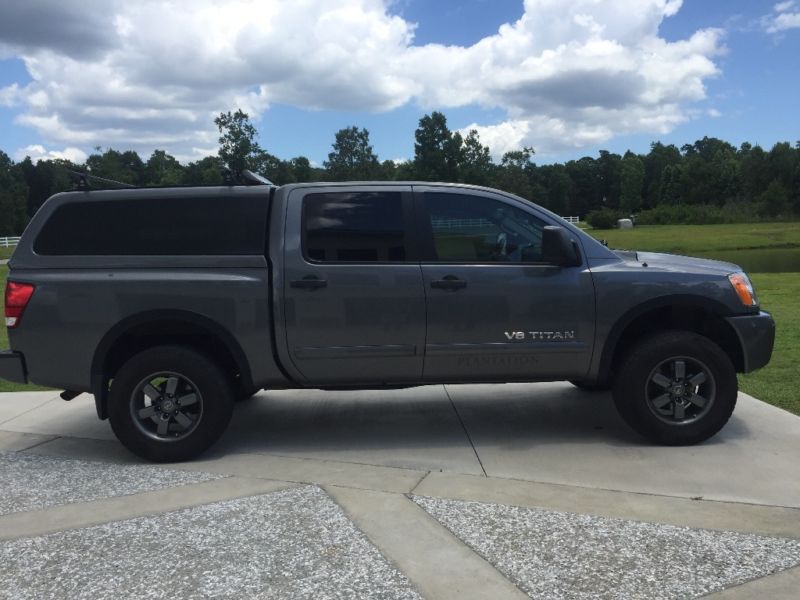 For more details email me at: desireetrunnell@juno.com .

This truck has every bell and whistle. I will try to list them all but if it is available this truck probably has
it. 4 door, sunroof, leather, automatic heated seat, auto mirrors, seat memory, etc...

It has a factory lift and has been leveled since the BebSlide was installed.

I had the largest tires put on that would fit without rubbing. I just installed new front rotors.

It is a a one owner truck and I have had the oil changed every 5,000 miles with synthetic oil.

The 4x4 is all factory but has the Pro4X package. It has locking rear differential and towing package.

It has built in GPS, CD player and rear DVD - removable tablets (after market)with WiFi capabilities. Great for the
kids! They are bluetooth enabled so they can be played with or watched with wireless headphones.

The camper shell is custom painted to match the truck. It has a locking gun box, clothes hanging rod, rear side
opening windows. I installed a BedSlide in the back. I have it set up for my bike but you could use it for
anything. It is heavy duty fully extends with over 1000 lbs on it.

It has 110 outlets in the back seat and in the campershell. It also has 12v in the campershell and a dome light. I
have installed an aftermarket air compressor and a small holding tank in the rear. Great if you ever have to air
down for off road use. Or air up bike tires, tubes for the boat etc.