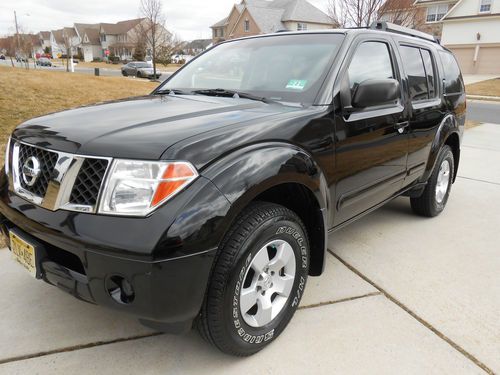 Condition: Used: A vehicle is considered used if it has been registered and issued a title. Used vehicles have had at least one previous owner. The condition of the exterior, interior and engine can vary depending on the vehicle's history. See the seller's listing for full details and description of any imperfections. ...
SELLING USED NISSAN PATHFINDER 2005 SE SPORT UTILITY V6 ENGINE WITH 4.0 LITER
CAR IS IN GREAT CONDITION, NO DENTS OR MECHANICAL PROBLEMS.
SUPER BLACK EXTERIOR WITH DARK GRAY INTERIOR.
THIRD ROW SEATS ARE INCLUDED TO FIT 7 PASSENGERS.
THIRD ROW SEATING CAN BE FLIPPED DOWN FOR ADDITIONAL BAGGAGE CAPACITY.
NEW TIRES, HIGHWAY MILES, REGULAR MAINTENANCE, GARAGE KEPT.
PATHFINDER COMES WITH A SONY XPLOD MUSIC STEREO SYSTEM. SYSTEM INCLUDES AM/FM RADIO, INTEGRATED PHONE, BLUETOOTH, AUX INPUT.
NORMAL WEAR AND TEAR, SEE PICTURES.
QUESTIONS? CONTACT SAIF @ (609)9204049 OR SAIFIJAZ@HOTMAIL.COM