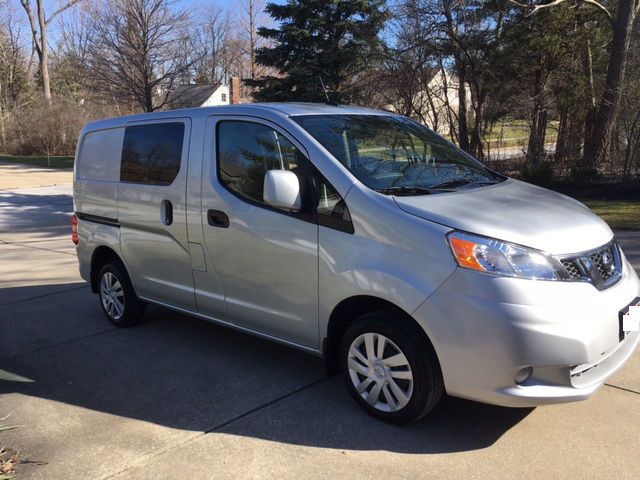 If you have any questions please email at: claycllaurenza@tenup.com .

Save thousands with this well maintained, fully loaded, lightly used vehicle still under warranty! Purchased new
in August 2015 and rarely used to deliver high end merchandise. We no longer have a need for this sort of vehicle
and offer it for sale. The vehicle is loaded with options including:
EXTERIOR APPEARANCE PACKAGE: This provides color keyed front end (rather than the ugly flat black standard),
colored front and rear bumpers, colored side mirrors, full wheel covers (An extra one comes with the vehicle) and
chrome grill.
TECHNOLOGY PACKAGE: Navigation with voice recognition, with CD and USB for Ipod, Sirius Satelite and Nissan Apps.
ALL SEASON FLOOR MATS: These are made by Weathertech for Nissan.
GLASS PACKAGE: Rear glass in doors and side glass in passenger cargo door.
SPLASH GUARDS
I love the vehicle. It has no issues, drives great with all the technology you need. Outstanding fuel economy.
Will assist with delivery. Two dealer oil changes and tire rotations completed as they recommended. Books/manuals
still in their factory plastic.

Nissan's got a big ol' show planned for its immersive space at the 2013 Shanghai Motor Show where visitors will see, touch, hear and smell the Nissan world. Sitting among 20 offerings that include the GT-R, Quest, Murano and Teana will be the Friend-Me concept (click image above to enlarge), the first show car created with "key input" by Chinese designers at Nissan Design China in Beijing. Its USP is "Four seats, one mind connectivity" that promotes information sharing among all the occupants.
The Friend-Me has the "vibrant, young" Chinese demographic in mind, our guess being Nissan thinks there's no reason to stop the digital sharing just because you're sitting in a car. We'll find out on April 20 exactly what's being exchanged in the Friend-Me. Until then, there's a press release below with a little more info.