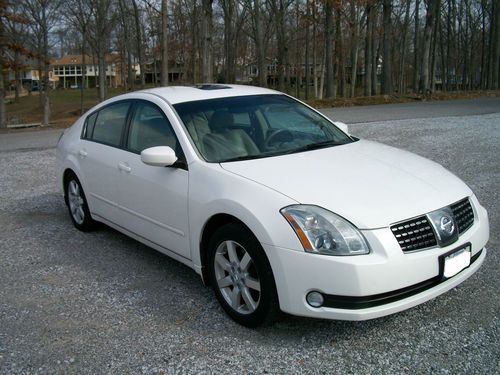 This 2006 Nissan Maxima 3.5 SL is a VERY clean used car having 101,603 miles.  I purchased this car from a family member after they purchased the car out of their two year lease.  I know the history of the car since it was new and it has been a great car.  The car has never been in the shop for anything outside of the scheduled maintenance and oil changes.  This car has been driven primarily on the interstate and many more miles to go.  There is a small 1 inch crack on the edge of the driver's seat merely caused from normal wear (shown in picture gallery).  The rest of the interior is very clean and no visible wear elsewhere.  The only reason I am selling this car is becuase I was so satisfied with it, I decided to buy a new 2012 Nissan Maxima.  If you have any questions please feel free to contact me at 618-218-4526 or by email at berobertson1981@gmail.com.  Below are some of the features on the car.......