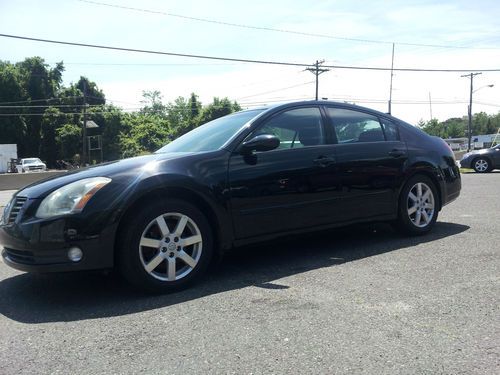 The big boy of the Nissan sedans, This beautifull Maxima 3.5 SL. Its got it all,sunroof,allow wheels, BOSE sound system. Lovely and well kept, ALL service records Great miles for the year, 4 door, Its powerfull V6 engine is the most reliable and low maintenance of its class, Black exterior on Black leather Like New interior the perfect color match, overall in like new condition, NEED FINANCING???? We deal especially with second and third chance financing, no matter what the situation is we will get you financed with our100% GARANTEED APROVAL!!!With Minimal Down Payment Of $2,000. We offer the most convenient hassle free credit guaranteed approval. Cash and finance price is different. Don't hesitate to call 856-725-6845 ask for Bill. Our hours of operation are Monday thru Friday from 10:00 AM to 7:30 PM. Saturdays from 10:00 AM to 7:00 P
INHOUSE FINANCING AVAILABLE**. NOBODY GETS TURNDOWN..EASY TERMS**