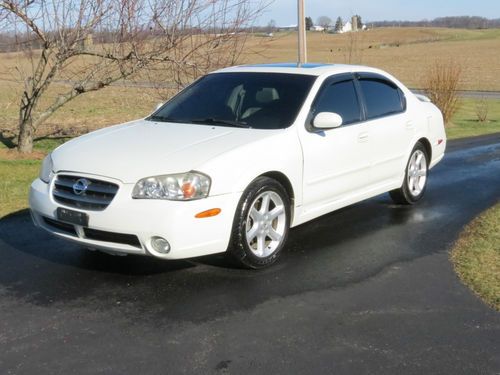 Nice loaded Nissan Maxima !NO RUST! Most Nissans run till the suspention rusts off and this ones still 99% rust free even underneath!! Kentucky car most of its life. White pearl paint . Powerful 3.5L V6 that still gets 29 mpg on hwy ! Engine and trans running great ! Nice Window Tint. Body in good shape with only 2 small dents in drivers side and one in trunk lid ! Interior in excellent shape besides two little rips in the side of the drivers seat ! Every thing is pwr and every thing works! Good tires all the way around with more then 50% tread ! New battery, engine mounts ,valve cover and gaskets, spark plugs, and right front wheel bearing! Engine light is on, I was told for co2 sensor and cam position sensor , common nissan thing. Abs light comes and goes . Suspention has some rattles. Slow pwr steering fluid leak also a slow air leak in the front left tire.Crack in the tail lights I just noticed that the sun roof leaks a some under the power of a pressure washer but i havent noticed it to leak when driving or parked in rain . Thanks any guestions feel free to call me Drew 3307046030

The Titan has continued to sit in a corner of Nissan's front yard, taken out on occasion but largely unloved, the same way you see a project truck in a neighbor's driveway that makes you wonder, "Are they ever going to do anything with that?" The fullsize pickup made the news about six months ago when reports surfaced that the next generation would offer a Cummins diesel engine that had originally been meant for Ram, then it returned to the shadows.
According to a report from Edmunds, the Titan will return to the spotlight in about a year, with the unveil of the 2016 model planned for next year's Detroit Auto Show. Along with that oil-burner, it will bring a gasoline V6 engine, a complete redesign and a regular cab configuration to finally give it a fighting chance against the thick end of the light-duty truck market. Toyota gets pressed for the molasses-like sales of the Tundra, but that fullsize entrant sold 7,890 units in January and 10,988 in December 2013. Nissan sold 887 Titans in January, 1,284 in December 2013 and broke 2,400 US sales in a single month just once in four years. (The segment-leading Ford F-150, for reference, sold 46,536 units in January.)
An entry-level model and a regular cab option should give the Titan a welcome and overdue sales boost. Better power numbers and fuel economy for the V8 would probably go a long way, too. We expect to start getting glimpses of its future later this year.