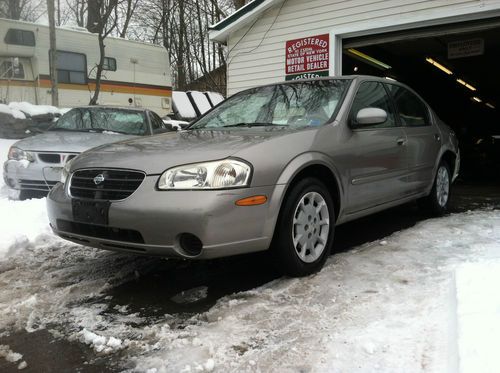 Condition: Used: A vehicle is considered used if it has been registered and issued a title. Used vehicles have had at least one previous owner. The condition of the exterior, interior and engine can vary depending on the vehicle's history. See the seller's listing for full details and description of any imperfections. ...
**2000 Nissan Maxima**
For More info Call, Email or Stop by the Shop.
Runs and Drives Great Just needs a little body work
**Car Specs**
3.0L V6 engine
Automatic transmission
Up to 19 cty/25 hwy mpg
Side/Curtain Airbags
Traction Control
Brand New Breaks
Brand New Tires
Brand New Rotors
- Phone Number: 1(845) 583-5110
- Email: SevenXAutoSales@gmail.com
- Address: 954 State Route 17B  Mongaup Valley, NY 12762

Nissan is up to something. The company announced pricing for the 2014 Nissan 370Z, 370Z Nismo, and 370Z Roadster, which isn't out of the ordinary. What is, is that the standard, hardtop 370Z has received a $3,130 reduction in price for 2014. The upmarket Touring model, meanwhile, has been dropped $2,550.
That means, excluding the $790 for destination and handling, a base, six-speed manual 370Z is only $29,990. That is an excellent deal. Adding an automatic will bump the price to $31,290, while the Touring model starts at $35,270 for DIY shifters and $36,570 for autos. The top-of-the-range Nismo runs $43,020. The Roadster, meanwhile, starts at $41,470.
So what does this mean in the grand scheme? Automakers don't just slash $3,000 off the price of a desirable sportscar because they're feeling generous.Could this be a move to clear out stock before a replacement to the current Z arrives?