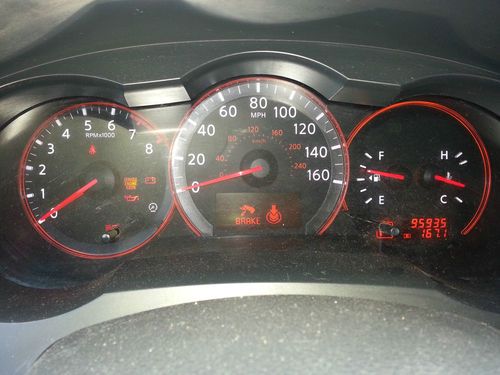 Condition: UsedA vehicle is considered used if it has been registered and issued a title. Used vehicles have had at least one previous owner. The condition of the exterior, interior and engine can vary depending on the vehicle's history. See the seller's listing for full details and description of any imperfections.Seller Notes:"Slight scratches by trunk, one scratch by right rear wheel fender and two scuffs by paint on gas tank door."

Condition: Smoke-free environment, no mechanical problems. Drives and rides GREAT! New tires 20,000 miles ago. New windshield. I am the original owner. The miles are almost all highway miles, as I drove 60 miles a day for work. I purchased the vehicle in 2009, with 700 miles on it.

Payment: Require $500 deposit within 48 hrs of purchase. Will not release the vehicle until full payment has been received and cleared. Money order, cashiers check, or PAYPAL.
Shipping: Buyer is responsible for vehicle pickup and any damages that may occur during transfer.

Nissan ZEOD RC stretches its legs for the first time

Ever see one of those videos where a baby deer is born and immediately starts walking? Well, this isn't one of those. For starters, the Nissan ZEOD RC isn't exactly a newborn. Nissan took the design of the DeltaWing, gave it a hybrid engine and called it something new. And it hardly started galloping straight out the box, either: this was just a low-speed demonstration run, held at Fuji Speedway where it debuted this past weekend.
Still, seeing the car that's destined to take the first lap of Le Mans under electric power alone actually start up and run is something of a landmark in the development of electric racing cars - even if this is, despite Nissan's best efforts to avoid the term, a hybrid, not a pure EV. The name stands for Zero Emissions On Demand, not zero emissions all the time. But then ZEATT wouldn't make for a very good name anyway, would it? See for yourself in the video below.