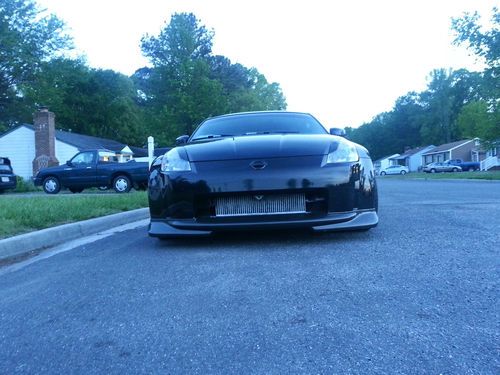 I have dyno sheets for this car showing it makes 437whp and 400 ftlbs of torque on a 9psi tune for daily driving.  the turbos are garrett GT28's so they spool very quick and are very strong.  The great part about this car is that it was the orignial APS test car so everything is done right.  It had the APS Blackbox management system for the tune.  The car was purchased by APS california and then sent to australia for the turbo kit to be fitted.  It was then sent to Orlando where test pipes were installed and it was retuned to its current power rating.  I drive this car everyday with no issues. Only thing i had to do was replace the tranny with a newer one because the 03-04 have weak synchros in 3rd and 5th gears so it now has a 6speed transmission out of an 06 g35 with 26k miles.  The only reason I am selling is to get a Caddillac CTS-V.  I would keep it if I could afford both but I can't so here we are.
Please feel free to text or call with any questions at 804-943-4164