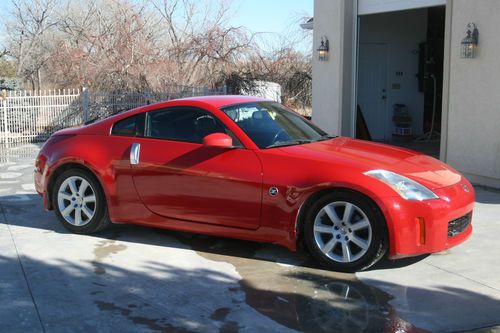 Condition: UsedA vehicle is considered used if it has been registered and issued a title. Used vehicles have had at least one previous owner. The condition of the exterior, interior and engine can vary depending on the vehicle's history. See the seller's listing for full details and description of any imperfections.Seller Notes:"My daughter is selling her Nissan 350z. she is now in college and is wanting a little bigger car. It has been a great car. It runs terrific. We have never had any mechanical issues with this car. It is a 2004 so it has normal wear and tear, but looks amazing when washed up. No issues with outside or paint. It has a Pioneer DVD Stereo system. Please ask for any info or additional pictures. The reserve is below dealers cost that we researched on Kelly blue book. Would make an outstanding car for a kid in high school!"

This is a nice 2004 Nissan 350Z.  My daughter has drove it the last 2 years to high school.  She is wanting to get a bigger car to move on to college with.  It runs great.  We have always kept the oil changed and have never had any mechanical issues at all.  it has a Viper security system and a Pioneer DVD Stereo system.  Please ask if you have any questions!

Even average production cars from Japan often seem very conceptual to US eyes. Throw in typical, nonsensical-quasi-English-words name like "Dayz Roox" and you'd be forgiven for thinking this Nissan box on wheels was still a designer's dream. But the fact is that the Nissan Dayz is a model currently on sale, and this Roox version is the latest take on the micro-van, which is a popular segment in Japan.
In fact, this generation of Dayz is the first minicar that Nissan has developed completely in-house, and the thing has been selling astoundingly well in its first stint on the market (30k units in month one month, says Nissan). So it's unsurprising that the company is looking to expand the range with a model that is more fully featured.
The Roox (we have no clue as to where that name came from, or what it means) would appear to be a high-roof version of the three-cylinder Dayz minicar - in fact Nissan goes so far as to call it an "Impressive Super Height Wagon." Features like automatic sliding doors, Around View Monitor and UV-insulated glass are all luxuries in kei-class car. The press release also specifies that the Roox is tall enough to swallow a 27-inch bicycle.