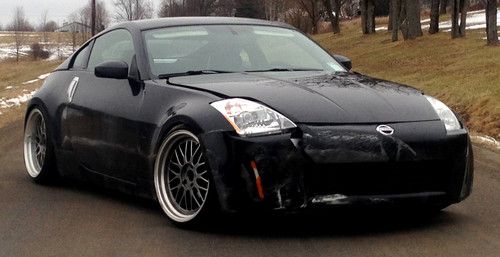 Hello Ebay, this is my personal ride that I actually recently acquired and only drove 1000 miles on. Unfortunately I hit a patch of black ice one night and lost control because I forgot to turn the VDC on(if it would have been on this would have never happened) and ended up hitting my baby. Let my loss be your gain. This car is originally from S. Carolina and has only been driven for 1000 miles in New York with having had it fully washed under body and over 6x within that small time frame. Rest assured there is not a speck of rust on it! With one look at the interior and engine you will be verified of the low miles! Everything shines and looks brand new(basically is)! Car is black on black (paint and interior), it has 19' BBS replicas all around that are staggered (9" in front and 11" in rear), the tires on them are almost new and are stretched with 225/30/19 in front and 245/30/19 in back. Also it has the Eibach sportline lowering springs which give you a 1.5" drop all around! These springs are of high quality and durability! This beast is extremely fast and handles like a dream! Total and utter control from bumper to bumper. And just plain and simply its a clean looking Sexy Beast! Do your research for exact specs. It is the Touring model and has the Manual 6-speed transmission, weather package, rear splash guards, HID headlamps, Bose speakers and many other awesome oem features! Also the rear wheels have a factory VLSD set up. (locks the wheels together if they start to slip for better traction) The damage didn't cause any lights to go off in the dash, air bags did NOT deploy, in fact, after I hit it I drove it home. Which means it runs and drives well! The alignment is now off so pulls to the right, so best to have it towed to not ruin the tread driving it. The front rims have scuff marks from the accident. If there are any other unanswered questions please don't hesitate to contact me via ebay or for a more prompt response on my mobile 607-621-2633. The title is rebuilt, so basically if you live in New York an you would like to register it then no need to go through a salvage inspection. You would be purchasing directly from the owner!! ONLY HAS 4600 MILES!!!!! ONE OF A KIND!! I also recently purchased racing pulleys for the engine and black/white reflectors for the bumper that I didnt have a chance to install. I'll throw them in the auction. Also has a Brand New battery! This car is a real head turner, everywhere I stop complete strangers walk up to me and strike up a conversation about it! You wont be lonely with her ;)

I've received many offers for my Z, therefore who ever makes me a offer I can't refuse can keep this wonderful machine, it can dissapear any day. Call/text me for a prompt response and I will end the auction early! Sold As-Is.

Answer to a popular question: Yes it's a "run and drive". You can drive it to alaska if you wanted to. There's only a alignment issue that will pull the car to the side. Other then that it's driving ability is unimpaired.