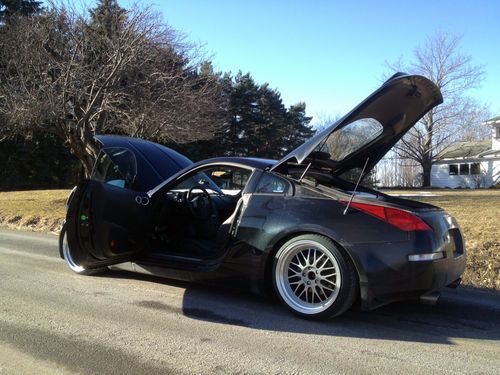 This is a 2003 350z with 4,714 actual Miles. Thats 4 digits! You will be able to validate the mileage once you look at the engine and interior up close and you will be able to tell its all new. Also I have insurance statements from previous owners with mileage and dates. This coupe has Eibach sportline lowering springs which are known high quality springs. The rims are 19" BBS replicas, not sure of exact model. Those are the only Mods on this car, everything else is OEM. The transmission is manual. This coupe's handling is amazing an off the charts! The tires on the rear are 245/35/19 and the front is 225/35/19. Let it be known that the tires are very stretched and look very sexy! You can ask for a closer pic if you'd like. The title is rebuilt from a previous incident in the passenger rear quarter to rocker panel. The plastic trim inside the pass door along the weather strip hasn't been fitted exactly right as of yet (that part of the job wasn't finished but is a easy fix with a little tweaking), as you can see in the pic. Other then that everything else was completed.

Currently the vehicle is in a run and drive condition and can be driven anywhere. No check engine or airbag lights. (I drove it to work the next day after I damaged it)

What I can see thats damaged is the bumper assy., the frame rail horns might be slightly off because the reinforcement bar moved, some plastics behind the bumper are broken, the pass headlight tab broke, the corner of the hood went under the driver fender so where they met they are a bit dinged. Also the pass fender corner by the light is slightly bent and in the back by the door(door when opened bent it), the front rims lips became scuffed. The rear bumper pass corner is scraped as well. Also the alignment is slightly off and the steering wheel slightly crooked as a result.

I purchased this car in excellent condition from a garage that did the previous repairs, and drove it as my personal weekend driver and damaged the front one fabulous day.. I put 1,200 mi on it myself so thats enough to know its nice.. Now I want to sell it and here it is on ebay for someone with the skill set to repair it. I've had it on here before but some of you obviously like to waste my time and not follow through on a deal... IF YOU WONT PAY DON'T BID!

Now that that's settled, I wish all of you happy bidding!

I require a $500 non refundable deposit within 24 hrs of the end of the auction to thwart off anyone that wastes time. The rest of the payment must be delivered within 3 days.