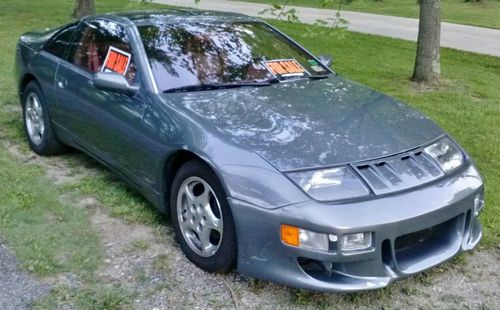 For Sale is my 1990 Nissan 300z Twin Turbo. I bought the car in Dallas, TX ten years ago and drove it back to Ohio. The car was originally white but has been professionally repainted gunmetal metallic grey. I never liked the factory foam wing so I replaced the hatch with a non wing one and bought a NOS filler panel. I like the smooth look this gave the car. Mechanically the car is very good. These engines are notorious for drying out seals and the car was a leaker when it got back from Dallas. Long story short I had a low mileage (approx 25k) JDM engine installed with a brand new factory Nissan engine wiring harness(no dry cracking plastic here). When I had the engine installed I wanted to enhance the performance without compromising the reliability. I put a lightweight, yet strong chrome molly flywheel as well as a stage 3 clutch. I replaced the goofy 2 piece, non serviceable boat anchor driveshaft with a 1 piece balanced aluminum racing driveshaft. I replaced the restrictive factory down pipes with smooth flowing stainless steel ones. This helps the turbo’s run more efficiently. The car is not a racecar but pulls good enough to make you smile. I am including a set of "race pipes" that eliminate the converters if you choose to put them on. The car retains the factory mufflers so it is a quiet sleeper. The car drives straight and smooth. I have replaced the tires within the last 4000 miles or so. I would say they have 90% tread. There may be 500 miles on the new BREMBO rotors and new brake pads. The red leather interior is in good shape for the age. The a/c was converted to r134 last year and blows ice cold. The only thing I can think of that is wrong with the car is it needs a new radio. It was not really a priority to me. I had bought a replacement factory radio out of another Z but the plug is different. I am including both radios with the car. I apologize for the long ad but I’ve owned the car a long time and have enjoyed improving it. I am on the road allot and do not have time to enjoy the car so I’ve decided its time to let it go. Please call me with any questions or to arrange to look at the car in person. It speaks for itself. Mike 614-394-7262