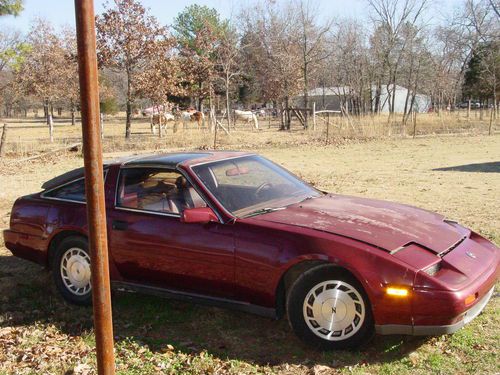 1987 nissan 300 zx t-top car runs GOOD, no misses, or clogged injectors. I am second owner of 2 yrs.I bought it for my daughter as a father daughter project as I am an accomplished street rodder and half ass mechanic.she joined the navy, bought a new car, and I  have a yard ornament.
this was a 1 owner car owned my my neighbor since new.  she gave me a folder of papers and service recipts that would choke a horse. car has 226k mi but car was treated with slick 50 every 50k mi.kept timing belts changed and had an injector service warranty replacement done. common on these cars as I have noticed.
I start and drive it monthly and add stabill fuel treatment when i fuel it. I have replaced the alternator and put new battery in it last week.
keep this in mind ...this is a 26 yr old car
BAD STUFF.. car has sat for a couple of years, it has a door ding on pass side, paint is fading ,driver seat is cracked,glovebox cover is coming loose,brakelight switch is sticking,and starts off of a pushbutton after key is turned on,horse broke antenna aerial off.     .DASH is not cracked!!! t- tops dont leak . feel free to call me if you're serious. KIDS have your dad call me 479-739-6524 travis