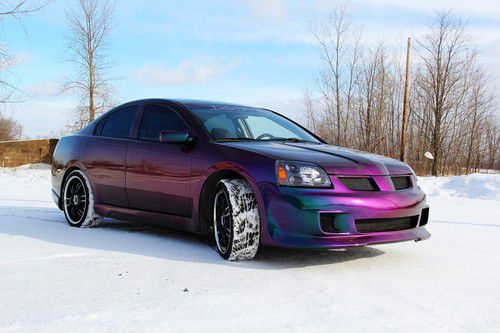 This vehicle was customized by The JunctionBoyz custom car garage from the bottom up.  It has a chameleon paint job that will make everyone look twice, a molded body kit, 20'' Elite rims, shaved door handles, and a cold air intake.  The system in this vehicle is ridiculous.  It comes with a 7'' navigation, (2) Rockford Fosgate amps, (2) 12'' sub woofers.  The vehicle is in mint condition without a dent or scratch on the vehicle.

Mitsubishi has an anniversary to celebrate. It has been selling cars in the UK for the last 40 years, and in recognition it is launching the Lancer Evolution X FQ-440 MR special edition with some real performance upgrades from top aftermarket companies. The models will be limited to 40 units in Frost White and priced at £50,000 each.
The special Evo uses a tweaked ECU to boost power to 440 horsepower and 412 pound-feet of torque with a six-speed, twin-clutch Sports Shift Transmission, and the engine receives a long list of augmentations with an intake, intercooler piping and tubular manifold from Janspeed, plus motorsport-specification, high-flow fuel injectors. To keep up with the acceleration, it gets six-piston front brake calipers and upgraded rear brakes behind 18-inch BBS forged alloy wheels. The suspension is lowered by 35 millimeters (1.378 inches) in the front and 30mm (1.181 inches) in the rear with Eibach coil springs.
The interior gets improvements to fit the performance upgrades. Leather-covered Recaro seats are found up front, along with an eight-speaker, Rockford Fosgate audio setup complete with a subwoofer. Navigation is standard with a seven-inch LCD touchscreen. The special edition definitely won't be making it to the US, but it's nice to see Mitsubishi commemorating itself with a performance model. Scroll down to get the full specs in the press release.