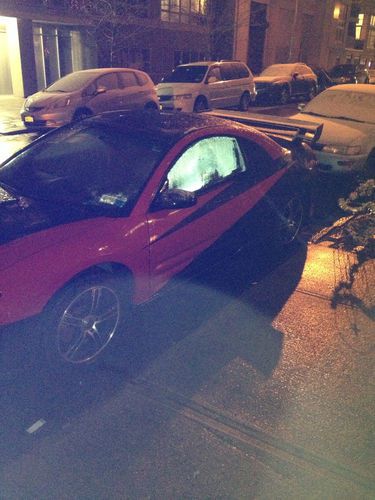 Hello All,I'm selling my 2001 Mitsubishi Eclipse AS IS. It is a fast attention grabbing car that will definitely be turning necks, especially at night time. It currently has an estimated 122,000 miles. The odometer does not display the "hundred thousand" digit so it appears that it has only 22,000 miles. The two front (driver/passenger) side speakers do not work, however the back 2 speakers which are connected to their own amp along with the big box sub-woofer connected to another separate amp will have the music on blast. LED lights connected to the body of the vehicle behind the wheels light up when turned on from their control box in the front of the car. LED lights also illuminate the front and back seats of the car (many different shades of blue, green, red, purple). You can also configure the lights to flash in sync with the music you are listening to. Radio is USB and CD ready. Sunroof works good. Car has amazing handling.

AC needs to be fixed for the summer weather, the heater is good. Few areas need a touch up of black paint, very small.  Please be sure to look at every picture carefully.  Right side bumper is sticking out a little bit and needs adjustment.  Front bumper has a crack on it.  Hood needs a simple touch up paint job.  Door frame has a small hole in it which recently had water come in through it and went the driver side floor, will need to be patched up.  Muffler is wobbly and needs to be tightened.  Car was last serviced on 1/2/2013 and had the following repaired and replaced:- Serpentine Belt- V/C Hose- FEL-PRO VS 50461 R Valve Cover Gasket Set- Water Pump- Day Timing Belt- Front Head Gasket- Antifreeze renewed- Oil Change- Break and Gas Pedal adjusted for better comfort ability.I hope to sell this vehicle to someone that can fix up the minor cosmetic issues and enjoy the car as much as i have. Car is in perfect running condition. No engine or transmission problems.I have the title in hand and the keys ready.  Please message me if you have any questions.
Deposit of $800.00 is required in less than 48 hours upon bidding has finished.