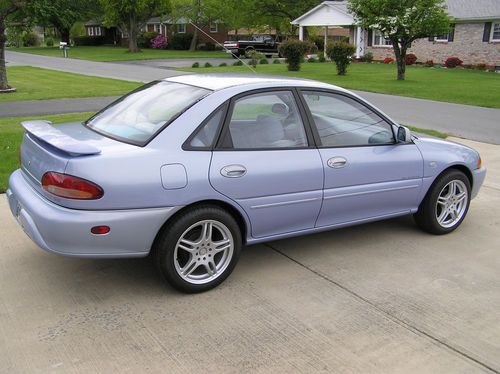 The paint and interior are original. The spoiler , door handles, and bumper covers are either dull or flaking, the hood has typical chips, the headlights aren't too faded.  The interior is splitting and there are some stains, but not bad overall.  The A/C and cruise work, along with the Pioneer stereo and the remote mirrors. There was a minor accident involving the drivers side, primarily the rear door.  The front door has minor damage, the rear door probably should be replaced.  I did an online search and there's plenty of doors out there. The doors and windows still function correctly.  The trunk is clean, with the original spare.  There are no oil or coolant drips or leaks and it's all original and unaltered under the hood.  The brakes are good.  Fairly new Raybestos pads on the front.

I had not planned on selling this car, but I had been looking for a 2005-2006 Corolla XRS and finally found one 200 miles from here and bought it.  Because I was planning on keeping the Colt, and before I found the XRS,  I bought new 205/60R16 Michelins for the Colt and had the 16x7.5 ICW wheels refinished at the same time. I have had these wheels for about ten years and they are true and balance well. The tuner lug nut adapter is included.   The tires and refinished wheels have less than 500 miles on them. The wheels were professionally refinished: media blasted and two-part base/clear used.  They look like new.

Mechanically, this car is A-1.  This is a 100% Japanese-made car and it proves the theories about Japanese cars being longevity champs. It needs nothing mechanically, buy it and drive it  immediately. I have most of the service records.  The original 14" steel wheels, plastic wheelcovers, and worn-out tires are included with the car, if wanted.

Please look closely at the pictures and email me with any questions you have.  You should inspect this car in person before bidding.  The high bidder will be expected to buy the car. Please don't win the auction then decide you don't want it.

There is, of course, no warranty, and the car must be picked up locally, or if shipping is desired, the buyer will need to arrange that.

Episode #357 of the Autoblog podcast is here, and this week, Dan Roth and Jeff Ross are joined by Jeff Glucker of Hooniverse.com. Topics include the SEMA Show, the Cadillac CTS being named the Motor Trend Car of the Year, Mitsubishi's near-term plans and the 2015 Subaru WRX. We start with what's in the garage and finish up with some of your questions, and for those of you who hung with us live on our UStream channel, thanks for taking the time. You can follow along after the jump with our Q&A. Thanks for listening!
Autoblog Podcast #357:
Topics: