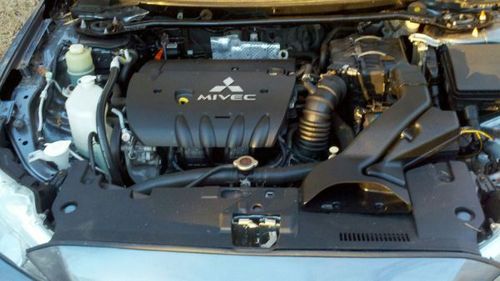 For sale is this beautiful 2009 Mitsubishi lancer, it is an automatic trans, with paddle shift on the steering wheel. It is a 2.4 liter with MIVEC, it is variable valve timing with DOHC. It only has 21,000 miles. this car runs great and is loaded. it has a black cloth interior, with a graphite gray exterior. it is a very clean car, very sporty. non-smoker. It runs great, and is very quite. It gets 21 city mpg and 28 hwy mpg. this is a great car call or txt me with any questions (864) 554 4871

Mitsubishi is recalling 165,923 vehicles in the US because it's possible for the drive belt to detach from their engines, potentially causing a stall. Specifically, the campaign covers 2008-2011 model-year examples of the Lancer, Lancer Evolution (pictured above) and Outlander as well as the 2009-2011 Lancer Sportback and 2011 Outlander Sport. All of the affected models use some version of the brand's 4B1 four-cylinder engine.
According to the National Highway Traffic Safety Administration, the engine pulley can wear causing the drive belt to slip off. If this happens, the alternator, cooling fan and hydraulic power steering can all stop working, and obviously, any of those things could make driving unsafe. However, if the belt detaches, then a warning light should come on in the cabin.
To fix the problem, Mitsubishi dealers will replace the original belt with a redesigned rubber part and will inspect the pulley. If worn, it'll also be replaced free of charge.