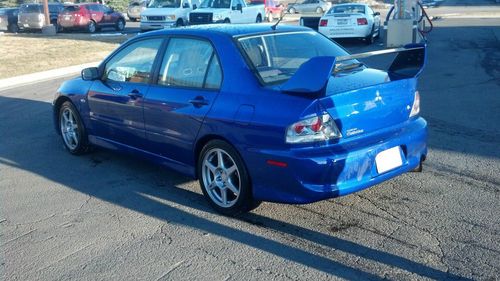 Condition: Used: A vehicle is considered used if it has been registered and issued a title. Used vehicles have had at least one previous owner. The condition of the exterior, interior and engine can vary depending on the vehicle's history. See the seller's listing for full details and description of any imperfections. ...
I am selling my 2005 Mitsubishi Lancer Evolution that has 57,XXX well maintained miles. The interior and exterior are both in very nice condition. Has only been driven in winter once, this being its first time, otherwise it was garaged in the winters. It was undercoated when it was bought new. Also it has 264 cams, adjustable cam gears, full 3in turbo back stainless exhaust, hard inter-cooler piping, Walbro 250l fuel pump, Excedy triple plate carbon clutch, ecu tune, and is running 22lbs of boost. The work was done a few years ago with no drive-ability issues at all. I have the paperwork from the shop that did the work. The car makes 350 AWHP. The tires are one year old and oil changes have been done every 5,000 miles with either Royal Purple or Amsoil. 1 week ago I replaced the timing belt, balance shaft belt, idler pulley, tensioner pulley, timing belt hydraulic tensioner, serpentine belt tensioner, serpentine belt, spark plugs and oil change using Amsoil. I am the second owner of the car and bought it at 40,000 miles a year and a half ago knowing the full history of the car. As with it being an 8 year old car there are some very minor flaws. Clean title in hand. The reason I am selling is that I recently joined the military and can no longer afford the car while doing my other hobbies. I hate to sell it, but tough times call for it. Selling price is $22,000.