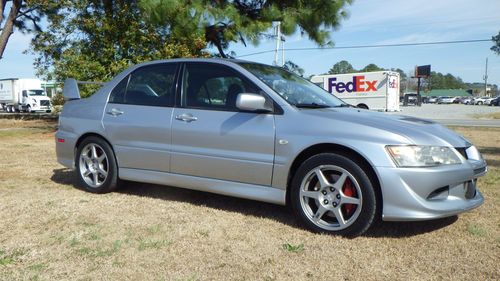 You are bidding on absolutely gorgeous 2003 Mitsubishi Lancer Evolution.  This car is Silver with blue/black interior. With only 70k original miles and a clean,clear title, is a RARE find.  The engine, from what we can tell is stock with little, to no mods.  The transmission is tight and the clutch feels great. No electrical issues, and from what we can tell, ALL electronic options are functional. No lights are illuminated on the dash.  This car has a fresh North Carolina safety and emmissions inspection.  The paint looks good besides some normal wear on a 10 year old car.  I have supplied many pictures for you to see the condition.  Its my opinion that this car is in average to above average condition.  This car has a clean carfax with no accident history.   Although carfax is clean and dosent show accident history, the front bumper and passenger fender have been repainted at some point. The paint job is great and matches.  There is a place that has a little damage on the passenger rear door/qrtr area that I took a picture of.  Approx cost of repair at my body shop is $600.  I can have this repaired for the high bidder and new owner for $600 prior to delivery or pick up.  The car does have a turbo timer installed.  We have this vehicle advertised locally and we reserve the right to cancel all bids and end the auction early.  Please dont bombard me with questions asking how much i'm asking locally.  Make an offer through ebay messages.  I will not sell outside of ebay.  If your offer price is accepted, I will relist with a buy it now and you can buy it through ebay.  We have relationships with several transport companies and can assist with any transport needs.  We can pick up at any local airports as well , the airport codes to check into are RDU, and PGV. Please dont hesitate to call Joe at 252-327-5004 with any questions.  This is a NO RESEREVE Auction and will be sold to the highest bidder.

We rarely hear any major news coming out of the National Automobile Dealers Association (NADA) annual meeting in Orlando, FL, but Mitsubishi executives found this a fitting place to announce a big push for increased advertising here in the US. A report in Automotive News states that the struggling Japanese automaker is returning to advertising in prime time television for the first time since 2005, with the push slated to begin in June and July for the launch of the 2014 Mitsubishi Outlander shown above.
Despite dwindling sales and a shrinking lineup, Mitsubishi's new North American chairman, Gayu Uesugi, has said on multiple occasions that the automaker has no plans to abandon the US market. Spending extra money on marketing and advertising should be a good start to help improve sales, but a lack of fresh and competitive products is also keeping showrooms empty. Aside from the new Outlander, the AN report says that Mitsubishi spokesman Roger Yasukawa said that a "yet-to-be-named subcompact" will arrive this year, which suggests the unnamed hatchback shown below (known elsewhere as the Mirage), could be heading to the US after its North American introduction at the Montreal Auto Show last month.