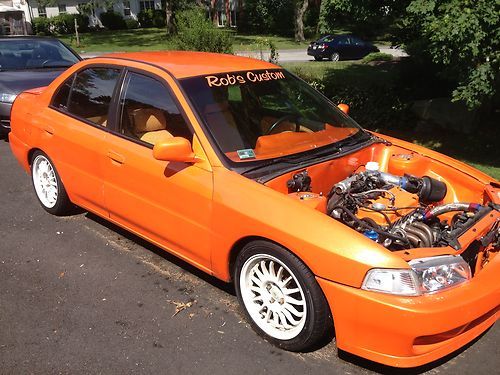 7 Alpine 6.5" monitors mounted throughout the car

Issues with the car:

It needs a starter

Due to it being a car that is driven there is some paint chips around the car however there are no dents or major scratches.

By March, Mitsubishi expects to have sold just 55,000 cars in the US this fiscal year. That's a tiny sum - by comparison, Honda has sold over 276,000 Civic models thus far this year - and that's just one vehicle, not an entire brand. Mitsubishi president Osamu Masuko recognizes this is not a tenable position, and he's hoping the company will shift 80,000 units next fiscal year. Warding off speculation, Masuko has repeatedly stated that his company will not retreat from the US market like competitor Suzuki.
We reported on one part of Masuko's plan, the updated Outlander, and now he has confirmed that the small Mirage will be sold in the US beginning next September. The cut-price hatchback is selling well enough that Mitsu's Thailand plant is at its full capacity of 150,000 cars. "And even at that level it's not keeping up with orders," Masuko tells Automotive News. Masuko went on to say the plant would be expanded next year to handle an extra 50,000 units. We can also expect the Outlander plug-in early 2014.