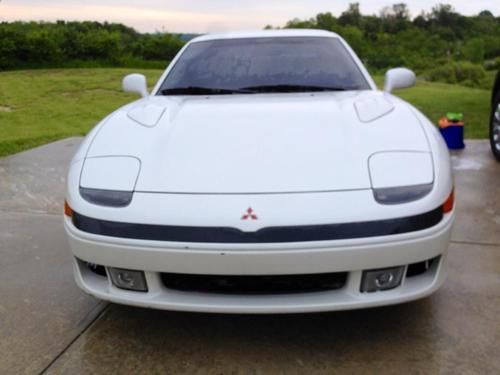 Edmunds and consumer reports give this car 4.5 out of 5 stars.
Sport and ECO mode engine map.
Touring and sport suspension mode.
Automatic air con.
Am/FM cassette deck with "old school" equalizer. Also jack for iPhone/etc. Very good factory sounding stereo.
The amount of electronics in this car for 1991 is very impressive.
Cool flip up headlights, and fog lights.
Excellent condition, everything is mechanically sound and operable.
Normal exterior wear and tear for the age of the car, but overall in great shape.
TB serviced at 60k interval, transmission at 70k. Car was owned by a disabled person, and was not driven extensively.
Selling this car for a co-worker who needs the cash.
Buyer to pay $2,500 deposit on closure of transaction. Remainder on pickup.
Thanks for looking.

The aging, oft-forgotten Mitsubishi Lancer won't get a replacement until sometime in 2014, but a new report states that the next-generation model could be a relatively drastic departure from the car you see here. Mitsubishi Motors Corporation President Osamu Masuko told Australian site The Motor Report that the new Lancer will be smaller than the current car, going in a different direction than the vast majority of other automakers.
"The new Lancer will be a very new car, and will be sized somewhere between the current model and its predecessor," Masuko-san told The Motor Report.
There are both pros and cons to this decision. On the plus side, a smaller car means the Lancer will likely have a weight advantage over other vehicles in its class. That said, Mitsubishi will need to find ways to maximize interior space and create efficient packaging in order to still have its compact sedan remain competitive with strong offerings like the Hyundai Elantra, Chevrolet Cruze, Ford Focus and so on.

Mitsubishi's current Outlander Sport has done a yeoman's job since it came on the market for the 2011 model year. The affordable crossover has been one of the few bright spots in the perennially troubled automaker's lineup - it's the brand's best seller in the US and sales are up nearly 40 percent this year. The subcompact CUV has become an increasingly important part of the Mitsubishi lineup, which is why you should pay attention to this XR-PHEV Concept - it's said to presage the next-generation model.
Stylistically, this is a pretty bold little CUV, with a striking face framed by bold zig-zags of chrome that underline the narrow headlamps and frame the massive lower fascia. The profile has a dramatically tapered greenhouse with bold sheetmetal contours and a funky blacked-out A-pillar that emphasizes the hood's height. The rear end is no less dramatic, with dual-pane rear tailgate with a particularly fast rake.
As shown here, the XR-PHEV (pronounced "Cross Runner") is a four-seat CUV that motivates its front wheels through a turbocharged 1.1-liter, three-cylinder engine with 134 horsepower paired with a 120-kW electric motor. In pure-electric mode, the 14-kWh battery is said to be good for 52 miles of cruising range and the combined fuel economy bogey is 66 miles per gallon on Japan's lenient testing cycle.