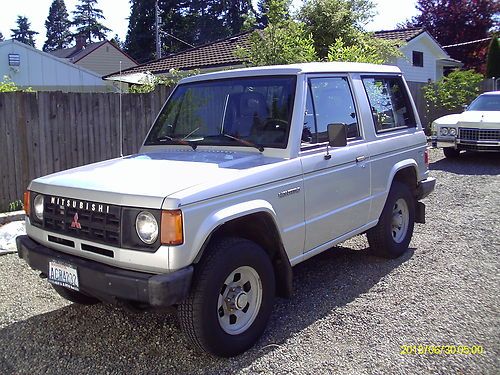 Condition: UsedA vehicle is considered used if it has been registered and issued a title. Used vehicles have had at least one previous owner. The condition of the exterior, interior and engine can vary depending on the vehicle's history. See the seller's listing for full details and description of any imperfections.Seller Notes:"Good Used Condition"

This is a true survivor Montero 2 DOOR SPORT, it is all original and unmolested. The truck has never been in an accident or had any body or paint work done. There is ZERO rust on the body and frame as it has been a life long Pacific NW truck and we do not use Salt on the roads here. The paint is in good but not perfect condition, the clearcoat is starting to show its age  though its not peeling or chipping. The interior is in good but not perfect condition, the seats are in great shape minus one very small cigarette burn on the drivers seat. That being said the car does not have any signs or smells indicating it was a smokers vehicle. The truck drives and runs great, these trucks are not known for being very powerful, but it has tons of low end torque and will buzz down the freeway with ease.  I will list out the trucks pros and cons below.

All original no modifications

Rear wiper does not work....possibly a bad switch

Rear bumper has a very slight wiggle in it

Mitsubishi is recalling 733 of its 2013 Outlander Sports that were fitted with leather seat covers due to problems with the seat-mounted airbags. Apparently, the wiring for the airbags may have been routed incorrectly when the seat covers were installed at the port.
According to the National Highway Traffic Safety Administration bulletin, the issue only really crops up if owners adjust the height of the seats. Naturally, if the seat wiring is damaged, the airbag may not deploy in the event of a side impact.
The affected vehicles were all manufactured between July 20, 2012 and May 29, 2013. There have been no reported injuries or accidents due to this issue. Mitsubishi, meanwhile, will begin notifying owners, who will need to report to their local dealer for free inspections or repairs. Take a look below for the bulletin from NHTSA.