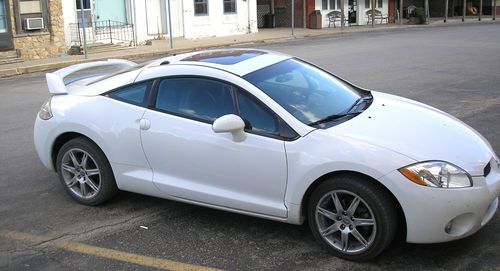 Condition: UsedA vehicle is considered used if it has been registered and issued a title. Used vehicles have had at least one previous owner. The condition of the exterior, interior and engine can vary depending on the vehicle's history. See the seller's listing for full details and description of any imperfections.Seller Notes:"HAS BEEN WELL MAINTAINED. OIL CHANGE EVERY 3,000 MILES. LESSS THAN 1,000 MILES ON 2 NEW TIRES."

CURRENTLY HAS 2 POWER BASE 12" SUB WOOFERS.  THE PRICE WILL BE FOR THE ORIGINAL RADIO AND SPEAKERS THAT CAME WITH IT.  IF YOU WANT THE INSTALLED SOUND SYSTEM, IT WILL BE $500 EXTRA.  IT BELONGS TO MY GRANDDAUGHTER.

IT ALSO HAS 4 NEON PINK LIGHT BARS IN IT.

THIS CAR IS IN A1 CONDITION TO MY KNOWLEDGE.  I JUST NEED TO SELL IT.

THERE IS SOME PAINT LOSS ON THE FRONT BUMPER AND THIS CAN BE SEEN IN THE PHOTOS.

PLEASE EMAIL ME WITH ANY QUESTIONS AND I WILL TRY TO HELP YOU.  I AM NO AUTHORITY ON CARS.

Just take one look at Mitsubishi's latest vehicles, both concept and production, and it's obvious that fuel economy - not performance - reigns supreme. With this in mind, it shouldn't be too much of a surprise that Caradvice.com.au is suggesting that Mitsubishi is putting development of future performance models (like the 2013 Lancer Evolution GSR shown above) on hold as the company focuses on electric and plug-in vehicles.
In speaking with Mitsubishi managing director of product projects Ryugo Nakao at the Tokyo Motor Show, the publication says that the entire Lancer redesign is on hold, meaning that the aging Lancer Evo and Ralliart will have to contend with fresh performance models like the Volkswagen GTI and Subaru WRX. That being said, the article doesn't completely shut the door on another Evo - in fact, it goes on to indicate that when a new generation does hit the streets, it will almost certainly do so with some sort of electric-assisted powertrain, an oft-repeated rumor that got its legs as early as 2010.