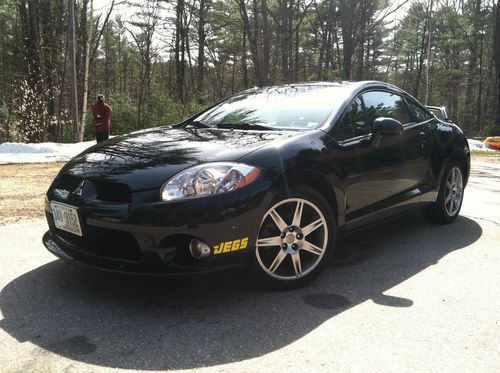 For sale is a black 2008 Mitsubishi Eclipse SE with 39,999 miles on it. It comes standard with a 3.8 Liter V6 Manual 6 Speed Transmission. It also has a Rockford Fosgate Sound System including a subwoofer and amplifier. A small area on the left rear view mirror has a small amount of black paint chipped off. I have owned this car for 2 years and bought it in NY. I love this car, its fast and definitely an eye turner! LOTS of Compliments!! This is an awesome drive.

Has brand new sports RSA Goodyear eagle tires. Has been completely tuned, cleaned in and out and ready to go. The car is located in the Lakes Region of NH where you can fly into Manchester NH (MHT) or Boston MA (BOS).  You can then take the bus to Concord NH where we can meet you to finalize the sale and then you can enjoy your ride back to your home.

It's not terribly often that we have news to report coming out ahead of the Minneapolis Auto Show. We say that not to disparage the Twin Cities, which are lovely, but new product reveals are few and far between for the show. This year, however, it seems that event will play host to the debut of a rather special limited edition Mitsubishi Lancer Evolution X. Though not coming directly from the Mitsu factory, we think the 311RS shows loads of potential for Evo fanatics.
The 311RS is the brainchild of circuit racer Ryan Gates, who has apparently spent the last three years developing what he believes is an Evo perfect for both racing and road driving. Starting life as a bog-standard Evo X, the Gates team has swapped out the factory intake, intercooler and exhaust system for more potent AMS pieces; resulting in output figures of 353 horsepower and nearly 359 pound-feet of torque. A new suspension from JRZ, brakes from Girodisc and 18-inch custom Rays wheels shod with high-performance Nitto tires represent significant updates to the underpinnings, as well.
Of course, the 311RS is also rocking a full body kit, too, with a more aggressive front air dam and a subtle lip added on to the stock rear wing. The blue and white racing livery, with matching blue wheels, looks racy without being too childish, we think.

Mitsubishi has an anniversary to celebrate. It has been selling cars in the UK for the last 40 years, and in recognition it is launching the Lancer Evolution X FQ-440 MR special edition with some real performance upgrades from top aftermarket companies. The models will be limited to 40 units in Frost White and priced at £50,000 each.
The special Evo uses a tweaked ECU to boost power to 440 horsepower and 412 pound-feet of torque with a six-speed, twin-clutch Sports Shift Transmission, and the engine receives a long list of augmentations with an intake, intercooler piping and tubular manifold from Janspeed, plus motorsport-specification, high-flow fuel injectors. To keep up with the acceleration, it gets six-piston front brake calipers and upgraded rear brakes behind 18-inch BBS forged alloy wheels. The suspension is lowered by 35 millimeters (1.378 inches) in the front and 30mm (1.181 inches) in the rear with Eibach coil springs.
The interior gets improvements to fit the performance upgrades. Leather-covered Recaro seats are found up front, along with an eight-speaker, Rockford Fosgate audio setup complete with a subwoofer. Navigation is standard with a seven-inch LCD touchscreen. The special edition definitely won't be making it to the US, but it's nice to see Mitsubishi commemorating itself with a performance model. Scroll down to get the full specs in the press release.