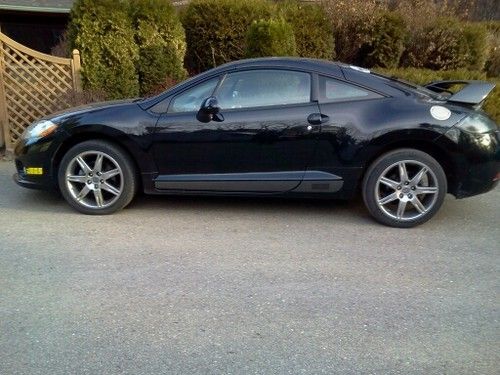 For sale is a black 2008 Mitsubishi Eclipse SE with 39,763 miles on it. It comes standard with a 3.8 Liter V6 Manual 6 Speed Transmission. It also has a Rockford Fosgate Sound System including a subwoofer and amplifier. A small area on the left rear view mirror has a small amount of black paint chipped off. I have owned this car for 2 years and bought it in NY. I love this car, its fast and definitely an eye turner! LOTS of Compliments!! I am selling this because I have upgraded to a pickup truck.

The weather didn't interrupt the Pikes Peak International Hill Climb this year, the sun staying out to shine throughout a mildly cloudy day. The crowds didn't interrupt the race, either. Last year there were incidents like the woman who leaned so far into the road that her camera tore a hole in a speeding Shelby Cobra and she had to be sent to the hospital. This year the organizers shrank the number of spectator viewing areas and put others behind fences, such that long stretches of the route were uninhabited by anything other than varmints.
The only unexpected visitor was a dusty track and what some competitors said were slightly higher temperatures that changed the amount of grip and increased times. Yet the calm let a couple of teams, like that sun, break through the clouds of past misfortune and claim victories they'd been targeting for years.