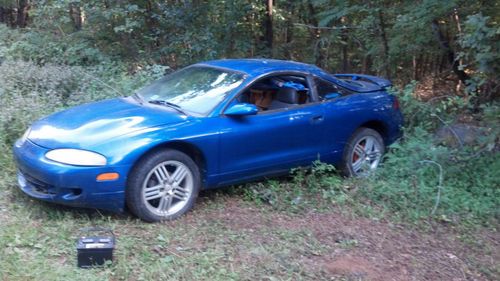 Condition: UsedA vehicle is considered used if it has been registered and issued a title. Used vehicles have had at least one previous owner. The condition of the exterior, interior and engine can vary depending on the vehicle's history. See the seller's listing for full details and description of any imperfections.Seller Notes:"Needs pleanty of work. Great trans mission 30k. Front pass side fender dented. Needs rear hatch glass. Won't start."

Solid car but won't start. 30k miles on new transmission. Pass side fender dented needs back glass. Clean title. Greedy muffler comes with it. Head has been ported and polished. Has later model eclipse wheels, Needs a driver side door handle and many other things. Look at the pics and call me for any ?'s.434-906-0960 or 434-263-7771.

the inside of this car is pretty dirty needs a good cleaning. carpet needs cleaned.