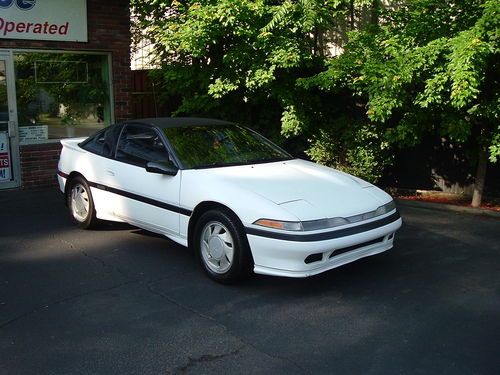 1990 Mitsubishi Eclipse GS, 162,600 miles,2 owners!!! this car has been my daily driver for the last 13 years, 100% stock original and unmolested, most of these cars are beat to death or now crushed, well maintained it's whole life, synthetic oil changes every 3,000, transmission fluid changed every 20,000 with mobil1 75/90 gear oil, AC blows cold, runs and drives great, reliable and great gas mileage, car is clean inside and out and shows well for a 23 year old car, lots of maintenance done over the years to keep this car in great running cond.

all of the following items have been replaced in the last year
new exhaust from the turbo back including cat converter
battery, alternator, power steering pump, hoses
lower control arms with ball joints
front end alignment
plugs, wires, air filter, oxygen sensor, at that time compression test was done with cylinder readings of 160-165-160-165 also turbo was inspected and has no shaft play and no signs of worn or broken fins.

some things to note:
pop up head lights tend to not work all the time, i had the motors tested and they work, leaning towards a relay or ground issue.
pass side power window motor is slow but it does still work.
does have some body filler on lower rear quarter panels.
2 small holes on rear seat fabric, they were there since i got the car.
i have original paperwork, window sticker and the stock factory radio, has an alpine stereo in it now with a 6 disc changer.

any questions just let me know, NO RESERVE!!!!!! zero feedback bidders you will be deleted, buyer responsible for pick up or shipping.