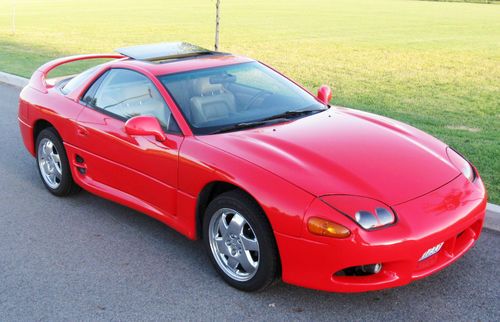 Condition: Used: A vehicle is considered used if it has been registered and issued a title. Used vehicles have had at least one previous owner. The condition of the exterior, interior and engine can vary depending on the vehicle's history. See the seller's listing for full details and description of any imperfections. ...
1997 Mitsubishi 3000GT SL
This is a great looking red Mitsubishi 3000GT SL with a manual 5 speed transmission. This car definitely turns heads when you drive down the road.
This 3000GT is a great car for someone with a little mechanical know-how (unfortunately, that's not me).  It has a new ECU, PTU, quality spark plug wires, spark plugs, and coil packs (all within the last 300 miles). It's loaded with features like power windows, power sunroof, power driver's seat controls, leather, stock chrome wheels, and working air conditioning. Very nice Infinity stereo system too. This car accelerates well but runs a little rough. It could use some TLC to get it to peak performance levels. It does pull a little to the right when driving but not so much that it is bothersome. The interior shows some wear (especially to the driver's seat) but is in good overall condition. The tires are in excellent shape and show little (if any) wear.  The passenger door lever (inside and out) works erratically and needs to be looked at.
It has just over 110,000 miles. Title is clean, passed Washington State emissions testing, and tabs were just renewed.
Please write with any questions you have and I will get back to you right away.