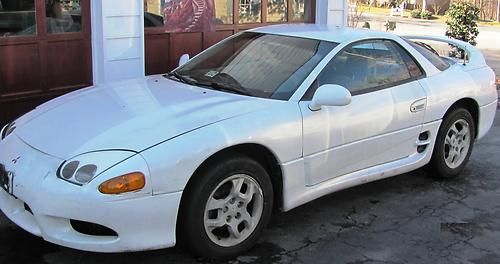 Condition: UsedA vehicle is considered used if it has been registered and issued a title. Used vehicles have had at least one previous owner. The condition of the exterior, interior and engine can vary depending on the vehicle's history. See the seller's listing for full details and description of any imperfections.Seller Notes:"Dead battery, dead cylinder, body damage on front bumper, passenger side panels, dings on top of trunk panel (easily fixed with a suction tool), driver side key hole panel needs fixing as it has scratches and rust. The vehicle doest not really have rust damage other than the driver side key panel. There are patches here and there where the sun has faded coloring on the car where there is black rubber, easily fixable with stain. The interior carpet has wear and tear at the foot of the driver side, but nothing horrific."

Mitsubishi to offer new Galant, Montero in US?

We admit it - we've been skeptical about Mitsubishi's fortunes here in the US for a long time now, and this month's reveal of the 2014 Mirage subcompact at the New York Auto Show didn't do much to quell our consternation. Yes, the Mirage should attract a certain portion of the buying population based on what will likely be the best fuel economy figures in its segment and a low price, but the profitability of basic small cars is limited even under the best of circumstances. Mitsubishi is clearly going to need something meatier in its portfolio if it wants to get back on track financially.
Help appears to be on the way. According to The Detroit Free Press, Masatoshi Hasegawa, the company's executive vice president here in North America, has confirmed that at least two more models are destined for the company's US dealerships, and it looks like they're going to be entries into higher-volume, higher-margin segments. Hasegawa pledges that the company will overhaul its lineup over the next two to three years, and one of them will be a successor to the often-ignored Galant, a midsize sedan we last saw for the 2012 model year.
And what of the other model? Apparently it will be an unnamed "bigger brother" for the new 2014 Outlander, an acknowledgment that suggests Mitsubishi is considering bringing its Montero/Pajero SUV back to the States. Earlier this month, we heard a report that a next-generation model for the venerable off-roader remains a few years out, but it's possible Mitsubishi might import the current aging model before the new one is produced. A big shift is said to be in the works for the fifth-generation model, with a massive weight loss and possible plug-in hybrid variant tipped as top goals for the program.