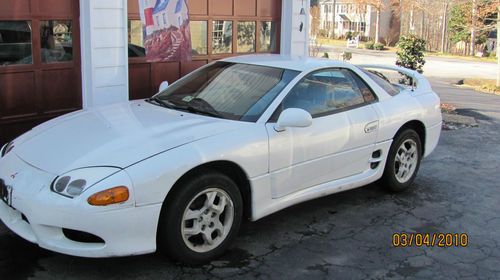 This is for a broken down 1997 Mitsubishi 3000GT BASE MODEL (SOHC 12v V6). It has body damage and what I have been told to be one dead cylinder in the engine. Midas claimed it to be a dead cylinder and Mitsubishi claimed it was something else. It is for someone who is looking to have spare 3000GT parts or able to get it back up and running. It needs repair work, so please keep that in mind if interested in purchasing this vehicle. It needs both mechanical and body repair done. It definitely needs a new battery. The last time I drove it was a 350 mile drive 2 1/2 years ago. I would receommend to anyone that buys this car to tow it instead of taking the risk of driving it before it has been checked out and fixed. I own the vehicle and have a clear title on it, which will be given at the time of sale. Final Sale. Thank you.

By March, Mitsubishi expects to have sold just 55,000 cars in the US this fiscal year. That's a tiny sum - by comparison, Honda has sold over 276,000 Civic models thus far this year - and that's just one vehicle, not an entire brand. Mitsubishi president Osamu Masuko recognizes this is not a tenable position, and he's hoping the company will shift 80,000 units next fiscal year. Warding off speculation, Masuko has repeatedly stated that his company will not retreat from the US market like competitor Suzuki.
We reported on one part of Masuko's plan, the updated Outlander, and now he has confirmed that the small Mirage will be sold in the US beginning next September. The cut-price hatchback is selling well enough that Mitsu's Thailand plant is at its full capacity of 150,000 cars. "And even at that level it's not keeping up with orders," Masuko tells Automotive News. Masuko went on to say the plant would be expanded next year to handle an extra 50,000 units. We can also expect the Outlander plug-in early 2014.

Mitsubishi says 2016 Outlander PHEV for US 'will be completely different'

While attending the Pikes Peak International Hill Climb with Mitsubishi we got a chance to speak to three Mitsubishi Motors North America (MMNA) executives about the Outlander PHEV, how the brand is strengthening its lineup and how it plans to promote that.
The Outlander PHEV that's quickly and quietly rolling off lots in Japan, Europe and Australia right now is not the same model we're going to get when it arrives in Fall 2015, with MMNA Executive Vice President Don Swearingen and US PR chief Alex Fedorak telling us that "it will be completely different." It can probably be viewed as the next-generation vehicle, part of the "major restyle in 2016" that will reskin the model in the new design language being applied to the brand's crossovers.
Its hybrid system is being tuned for more refinement, and the same work being done on the interior.