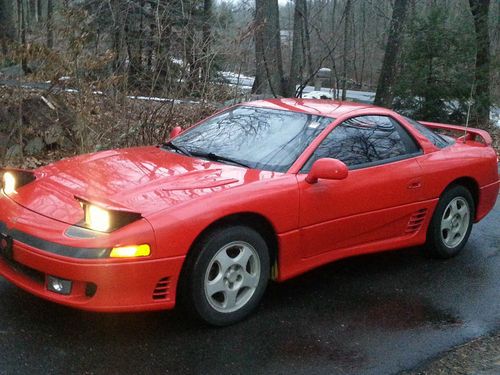 You are looking at a 1993 Mitsubishi 3000GT SL, this car looks and runs AMAZING!  The interior is in incredible shape and the exterior is very clean!  This 3000GT only has 104,000 Miles!!! That is an average of 5200 miles a year, this car was barely driven!!!  I have a Carfax and have uploaded pictures of the first two pages.  The Carfax show 0 accidents and 0 problems!  In fact there are 27 service records listed in the Carfax.  This car was definitely very well taken care of and it shows!

Here is a list of just the recent service records on Carfax:
11-3-12 Tires Rotated, Balanced, and an oil change
6-21-12 Tires Rotated, Balanced, and an oil change
12-16-11 Spare Tire Remounted, Oil Change, Tire Repair
9-1-11 Crankshaft Position Sensor Replaced, Tires Rotated
6-4-11 Brake Pads Replaced, Front Brakes serviced, Oil Change
This car is absolutely loaded with options.  It has leather, power windows, power locks, remote keyless entry, a really nice digital climate control unit, and much more!  The headlights go up and down with absolutely no issues.  Brand new clutch!!!  This vehicle is also equiped with ECS or electronically controlled suspension system.  It has a sport setting and a touring setting.  Sport setting uses the hardest damping force for great handling, better response, and a sporty feeling.  The tires seem to have plenty of tread left.  This car looks as close to a new car as a used car possibly can.  If I were to nit pick I could find a few minor issues for example:
Here is a list of the minor issues I have noticed:
-Power mirrors are really slow
-There is a touched up scratch on the hood where the hood meets the driver side headlight
-The power antenna does not work (it stays up)
-The driver side fog light is burnt out
-The power outlet close to the center console does not work
-The plastic vents in the top of the dash are popping up and seem to be breaking (Pictured)
-Spoiler paint is faded
-There are a few minor dings here and there
That is a very small and very picky list considering the car is 20 years old.  You really have to see this car in person to appreciate it.  It is in amazing condition and if you are looking to buy a 3000GT this is probably the best one you are going to find.  Feel free to call me or email me with questions.  I will answer any questions with the best of my ability.  I will consider trades, but keep in mind I will be giving you wholesale value for the trade.  If you want to drive it feel free to give me a call.  If you do come to drive it and think you are going to want it, please bring a deposit.  I will not hold the car unless I have a non-refundable cash deposit in hand.  If you want to see more pictures feel free to ask, just please include an email address I can send them too.  I would also be happy to text pictures to you.
Here is a link to the Kelly Blue Book Private Party Value
Here is link to Suggested Retail
I am a dealer.  We have a small shop off of exit 1 of route 95 in  Ashaway RI.  This is a wholesale piece that I decided to offer to the public do to the amazing condition it is in.  This car is being sold AS-IS.  Because it is a wholesale piece there are no additional fees such as the Doc Fee.  You will also be responsible for registering the car in the state that you live in, paying sales tax in the state you live in, and other fees incurred while registering the car.  If you are from CT we will get the emissions taken care of before you pick it up.  If you live in RI we will get the state inspection taken care of before you pick it up.  I will not do either inspection or emissions until I have a non-refundable deposit.  If you are from out of town and you are flying in to pick it up.  I will be happy to pick you up at the airport, as long as you fly in at a reasonable time.
***A 20 temporary plate is available for a $20.00 fee (exactly what RI charges us for them).  We MUST have have proof of insurance one business day before you pick the car up.
***If you are paying with a bank check you MUST fax or email us a copy of the bank check 2 business days before you pick the vehicle up