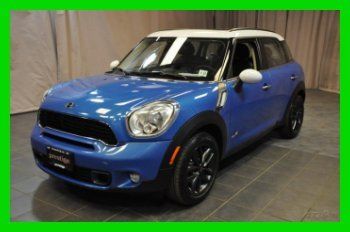 The One Mini Should Have Taken Rallying
It needs to be said: Mini using the Countryman as their World Rally Championship racer's bodystyle of choice has done them no favors on the marketing front. And that's what it's all about in motorsports these days: marketing and image. We have just driven the 2014 Mini John Cooper Works Paceman All4 through Frankfurt's surrounding rural areas, and even in thick snow where few souls dared to tread, it has singularly rekindled some faith in the John Cooper Works sub-brand - a glorious name whose credibility has been threatened by portly and somewhat pointless products like the JCW Countryman.
The JCW Paceman is a little quicker than its Countryman relative, a little lighter, hunkered down lower, and better looking. We can't say we're crazy anymore about the stock Chili Red details and black exterior they keep showing us at these launches, but that's just paint. Then there's that projected pricing of $36k-plus that puts us on the verge of yelling "¡No mas!" But the All4 system on our 215-horsepower Paceman worked extremely well when paired with a set of exceptional Pirelli Sottozero Winter 210 Serie II tires (sized 205/55 R17 91H all around). The combination of all-wheel drive and good rubber encouraged us to gradually up the average speed and enthusiasm the further we drove along.