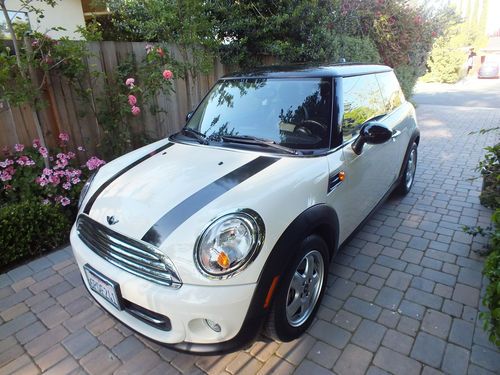 We're selling our 2011 Mini Cooper since we just had a baby and need a bigger car. This Mini is in excellent condition with low miles. As you can see in the pictures, the car has been very well maintained and reserved for just driving on the weekends. There are no stains in the interior nor was the car smoked in. There are no scratches or dings on the exterior with the exception of a very small scratch on the right quarter panel. Otherwise it's in "like new" condition.

The Mini is still under the original 4 year/50,000 mile warranty and has been regularly serviced at the Mini Cooper dealership (all maintenance records are available at the dealership). The car is free of any mechanical or structural problems. Drives really well.
Feel free to reach out if you have any questions. The car is being sold for $18,500 or best offer. Thanks!
Full specs:

Mini is certainly no stranger to a special edition, as unique option and styling packs have been a staple of the Mini line since its return to the US market, but it's next special trim is quite a big departure from previous cars. It's based on the Countryman, and is called the Black Knight Edition.
As you cans see from the image up top, it'll sport a sinister, matte-black paint scheme, making this Mini not unlike BMW's range of Frozen Edition cars. First reported on by those Mini-obsessed folks at MotoringFile, the Black Knight Edition Countryman will be limited to 60 units, and will be offered on a first-come, first-serve basis, making this car quite a bit different from previous special editions, which generally stuck around for a full model year.
According to MF, the matte finish will only be available on the Cooper S Countryman, although oddly, one of the teaser images shows a John Cooper Works badge. BKE models should be coming nearly loaded, which means that there's not a lot of customization done and the price tag is probably going to be exorbitant for a Mini. Buyers will, though, have the choice of front- or all-wheel drive and a choice of six-speed manual or six-speed automatic.