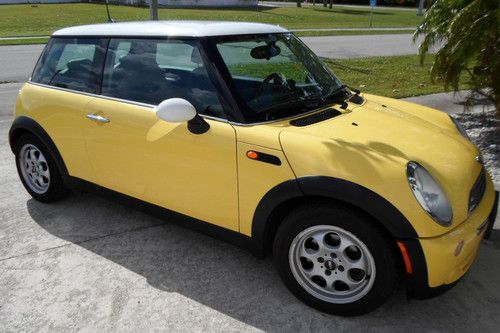 Interior Black Panther/ Black Leatherette Upholstery with the following options:
Dynamic Stability Control  (DCS)
Sport Seats
Cold weather package, heated front seats
Almost 98000 Miles. All maintenance up to date, all done at Mini Dealer. In great condition with one minor dent in back.
EPA Mileage  36 mpg.
Only reason for sale, Have a car to many. I love my Mini and so will you.

One of the big challenges as an automotive journalist is reviewing cars that you have a personal connection to. I have a strong passion for Minis. My first new car was a 2004 Cooper S, and I still own a 2006 model. It's this affinity that's left me with a general disdain of the 2007 to 2013 model relative to my first-gen.
The last-generation cars, with their turbocharged engines, softer suspensions, duller steering and homelier looks are, in my mind, inferior to their 2002 to 2006 predecessors. As a car reviewer, though, I couldn't in good conscience argue the same point. The R56, as the last-gen cars were known internally and by enthusiasts, was a better-balanced vehicle that retained the lion's share of the abilities and character of the first-generation, R53 Cooper S, but they were better thought out, better designed, more livable, and felt like more complete products.
Before the third-generation of the reborn Mini Cooper S landed in my driveway, I couldn't help but wonder whether the model would continue its slide towards mass appeal, or if it would re-embrace the enthusiast realm with a stronger driver-focused mission. As I found out during my week with the car, it was a bit of both.

Honda engines and giant killing in the classic Mini Cooper

Electric Federal has taken a fresh look back at the enduring legacy of original Mini with a video interview with Heritage Garage's Graham Reid, one of the foremost experts on classic Minis. As Electric Federal points out, it's important to remember that the Mini did not start out as a performance car. It was built in response to the Suez Canal crisis of the mid-50s, which had a similar effect on British gas prices as OPEC did on American prices in the 1970s - rationing and rapid price jumps.
Through the years, Minis have grown from their budget roots to become seriously competent performance machines. As Reid says, a 150-horsepower Mini on the right track should have no problem outpacing a contemporary Porsche 911.
For some time now, classic Mini owners have been dropping Honda engines under the tiny hoods of their classics. With up to 250 horsepower pulling a car that tips the scales at barely 1,200 pounds, the upgraded Mini is "a real sleeper," Reid says. Interestingly, Reid doesn't mention another increasingly common swap in the Mini community - Suzuki Hayabusa-powered Coopers.