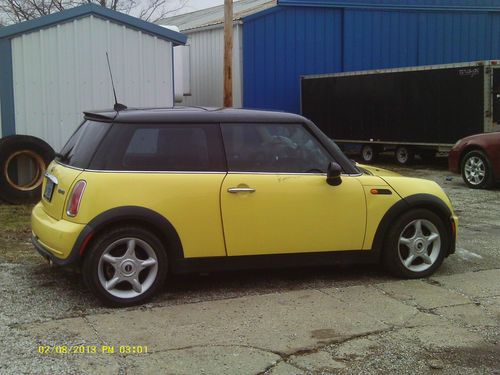 Hello, I am a small truck dealer in southeastern Indiana and I bought this car for my 15 year old daughter to fix up for her first car, but I have since took a different direction. The car has been slightly wrecked in the left front corner. CLEAN TITLE! I purchased this mini from a inoperable sale in Houston, TX. The parts that it needs in my personally opinion and not limited to are: hood, front bumper cover, left headlight assembly, grille, fog light assemblies, inner bumper support, inner fender, tie rod end, windshield, and both front air bags. This is just my visual guess of the parts that I see it needs, I am sure there are more little pieces. Other than the damage the car is rust free and very clean. I personally do not see any frame damage myself, but I am not an expert either. The car does start right up and run fine, but the transmission does not pull in foward or reverse. It lunges like it wants to go but it does not move. I do not know if this had anything to do with the accident or it has a transmission problem. The mileage is actual and again the title is clear. I am a licensed Indiana dealer so Indiana residence will be responsible for 7% IN sales tax, but no other hidden fees will apply. Buyer is responsible for shipping arrangements, although I will help with loading onto the shippers trailer. This is a No Reserve auction, so high bidder will own the car! Please do not bid if you do not have the funds or do not plan on completing the deal. If you have any questions or would like to inspect the car prior to bidding please feel free to call or text me at (812)614-8323 Thanks!

BMW effectively hit the reset button when it unveiled the new Mini at the LA Auto Show last month, opening the door to a whole raft of new variants to follow - and this is the first.
Set to be unveiled at the Detroit Auto Show next month is the new Mini John Cooper Works Concept, a show car that previews the next hot hatch from the Anglo-Saxon automaker. Mini isn't saying much about what makes it tick, focusing instead of the design that sets it apart from the standard version we've already seen.
This JCW concept features a lustrous grey paintjob with bright red accents, 18-inch alloys and an upgraded aero kit, all aimed at making the Mini look that much sportier. It's got bigger air intakes where the fog lights would be, LED headlamps, a black grille frame, side skirts, a rear bumper with diffuser insert and a roof-mounted spoiler.