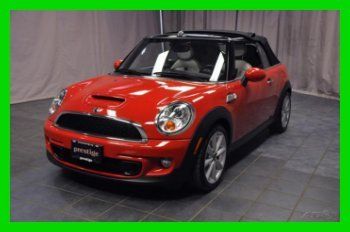 Coming in just over 10 inches longer and 6.5 inches wider than the 2013 Mini Clubman, the new Mini Clubman Concept that you see above is set to debut at the Geneva Motor Show next week. Let's get the maximum mini jokes out of the way right off the bat... Done? Okay, moving along.
Adrian van Hooydonk, Head of BMW Group Design, says that this Clubman Concept "shows how the Mini Clubman could be taken a step further: more interior space, a greater sense of high-end quality and yet still clever, bold and distinctive." And that extra interior space will be accessible through four real doors, eschewing the single-sided barn door approach of the current Clubman. Well, mostly - there's still the side-by-side barn door philosophy at the back instead of a more traditional upward-opening hatch. In fact, spy shots and early rumors pegged this more conventionally doored Mini as a new model selling under a new name, possibly Traveller. However, it appears that Mini will stick with the brand equity it has established with Clubman instead.
As you can see in the small image gallery above, the Clubman Concept is instantly recognizable as a Mini, though a somewhat more refined overall package than past efforts. The front headlamps still have a bit of a surprised look to them, but we think this concept's overall fascia, and its unique bright finishes, might be more successful than the latest Cooper's. At the rear, there are a set of rather large taillights dominating the view, and we note that the prevalence of air intakes and scoops at parent BMW have moved on down to the Mini line. We'll have to reserve final judgment until we see the Clubman Concept in person.