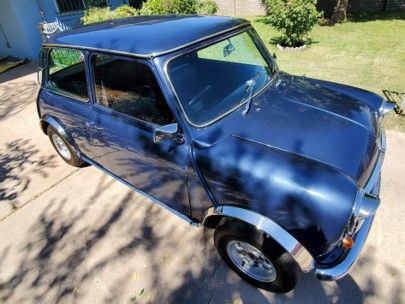 Authentic manual transmission, right-hand drive, 1981 Austin Morris Mini 1000 from England, "frame-up" restoration in 2012 (included body, rebuilt engine and re-upholstered the interior) and brought over to the US in 2013. This car was rebuilt to the original 1981 look basically but has had a radio and speakers added. It still has the original British plates and plate etching on the windows.

She's a beauty, and, especially with the right-hand drive, tons of fun to drive. I would love to keep it, but I don't get to drive it very much and think that someone else should have it who can enjoy it more. An amazing car like this needs to be driven and enjoyed, not sitting in a garage or carport all the time!

Mini blows up over women applying makeup in cars

Distracted driving is a very real problem. From drivers with phones dangling from their ears to those constantly adjusting the stereo or dealing with rowdy children in the back seat, anything that diverts attention away from the act of driving is a potential danger. And yes, that would indeed include applying makeup while driving.
Publicis, the advertising agency used by Mini in Mexico, came up with an inventive (or offensive, depending on your point of view) way of reminding female drivers "that there's a time and place for everything." And while we're not quite sure of the veracity of the statistics cited in the video below, or even the necessity of its production in general, perhaps we'll just take it as a reminder to pay attention while driving... no matter what else happens to be on our minds. Or faces, as it were.
Scroll down below for the explosive demonstration.

Mini will be ending custom orders of the current R56 Cooper Hardtop ahead of the retooling process for the new F56 Mini. That means owners who aren't enamored with what they've seen of the model's new look but still want a personalized version of the tossable hot hatch had best get down to their local Mini dealership and submit their order post-haste.
According to Mini enthusiast site Motoringfile, all orders must be submitted by August 28 in order to get a custom build. Orders are also locked in after that, so if you do get one of the spots, make sure you're absolutely content with the car you order. This cutoff will affect all models of the Hardtop, including the John Cooper Works model.
After August 28, owners will need to wait for the new Hardtop to arrive, which Motoringfile estimates will be in March of 2014. If you miss out on this final allocation of hardtops, all is not lost, however. Mini will still accept personalized orders on other bodystyles, which won't be replaced by F56-based models for some time.